Is Ted Nugent a Threat to the 2nd Amendment?

In his blog, Andrew Harris of Wellsville Daily.com argued that Ted Nugent, the Michigan-born guitarist and NRA board member, is a threat to the 2nd Amendment.

To make his case, Harris pointed to the Motor City Madman’s antics at the 2012 NRA Exhibition where he spoke on politics, the Second Amendment, and the upcoming presidential election in his own patented hyper-patriotic, apocalyptic, rock-and-roll-laced rhetoric:

I’ll tell you this right now, if Barack Obama becomes the president in November, again, I will either be dead or in jail by this time next year.

If you take that adamant, we the people defiance, remember we’re Americans because we defied the king. We didn’t negotiate and compromise with the king, we defied the emperors, we are patriots, we are brave heart, we need to ride into that battlefield and chop their heads off in November.

(Nugent was investigated by the Secret Service for those remarks.  It was determined that he posed no threat to President Obama).

Harris argued that the Nuge’s vitriolic speech makes him seem “like the very guy we should be keeping guns away from.”

But Uncle Ted’s hell raising (a term he likes to use to describe his brand of advocacy) at the NRA Show wasn’t his only contemptible act in recent months, according to Harris.

Over the weekend, News broke that Nugent would plead guilty to a misdemeanor violation of the Lacey Act, stemming from a 2009 hunting trip in Alaska. 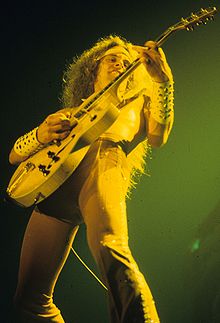 “In the plea agreement, Nugent admitted to shooting and killing a bear using a bow and arrow during a hunt on Sukkwan Island in southeast Alaska, just days after he wounded another bear….As part of the plea deal, Nugent has agreed to pay a $10,000 fine, not to hunt or fish within Alaska or on any other U.S. Forest Service lands for one year. The deal also includes two years probation,” from CNN.com

Harris said that it was “one of the worst crimes against wildlife: wounding an animal, failing to pursue it for the kill, and then harvesting another animal.”

Speaking about the incident, Nugent’s lawyer, Wayne Anthony Ross said that Nugent wasn’t aware of the 1-bear maximum law (the Lacey Act) and that the “bear left only traces of blood, as if it had just been scraped by the projectile.”

Moreover, he added that Nugent is pleading guilty because “the law is the law.”

“What are you going to do about it — a magician act?” Ross told the Associated Press. “The fact that we didn’t know about it doesn’t change it.”

Harris then went on to point out Nugent’s plea of no contest to misdemeanor charges of deer-baiting, while hunting in California in August of 2010.  As a result of this, Nugent’s deer hunting license was revoked through June 2012.

The NRA has done almost nothing in response to Director Nugent’s crimes or hateful speech. Allowing Nugent to remain a member, let alone a director, is putting our right to bear arms at risk. I hope the NRA makes the right choice; they are defending something much bigger than celebrity “hunters”.

Is Harris right?  Is Uncle Ted bad for the 2nd Amendment?  Does he give gun owners a bad name? 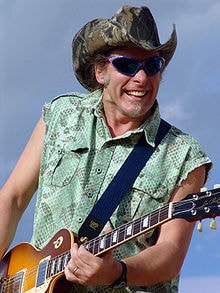 My thoughts on this are as follows, the Right’s got Rush Limbaugh, the Left’s got Bill Maher, and the NRA’s got Ted Nugent.

For the most part, all three are beloved by their respective constituencies.  Why?  Because of the entertainment value they provide (who doesn’t laugh hysterically when they hear Nugent impersonate Nancy Pelosi?  Check out video below, around 7:47).

See, most rational people understand that Limbaugh, Maher and Nugent are political entertainers, caricatures of the people they sometimes claim to represent.

As long as people understand this, they are not a threat to communities or movements that may identify with some of their thoughts and opinions or who look to them for entertainment.

The real danger is when people (typically the media) use their most outrages remarks as a facsimile for mainstream thought.  For example, Jonathan Capehart of The Washington Post said this about Nugent’s remarks and their connection to Mitt Romney:

“Until the candidate [Romney] condemns the rocker, we should all assume he’s fine with that kind of talk from a surrogate.”

In other words, Romney supports everything Nugent’s said because he hasn’t issued a strong enough statement denouncing Uncle Ted (the Romney campaign did release a statement condemning all extreme and divisive rhetoric shortly after Nugent’s comments went viral).

By proxy, does Romney, the Republican Party, gun owners have to answer for everything Nugent says?

I think not.  And I think most people understand this.  Your thoughts?