Where Do I Hunt (When all I see are 'Posted Land' Signs)?

Over the last decade I have been seeing more and more posted signs on private property and with housing developments popping up like weeds in a vegetable garden, I am finally starting to seriously feel like hunters are losing room.  Up until recently, posted land didn’t really concern me; I was the member of an active hunting clubs for more than 10 years and did a lot of my hunting on leased grounds. But the high costs associated with membership “forced” me to quit and since then I have been in line with the rest of the hunting world, trying to find other places to hunt game. What I have learned is that, if you want to find the good spots, you are going to have to do some legwork.

Here in New York and (especially in the Adirondacks) a lot of sportsmen formed private hunting clubs, securing and ensuring land privledges for a collection of hunters, as the sea of posted signs started rolling across the state almost 30 years ago. Though I’m sure many would disagree with me (and I would concede that membership rates probably vary greatly accordingly to region) these clubs seem to be on the decline. 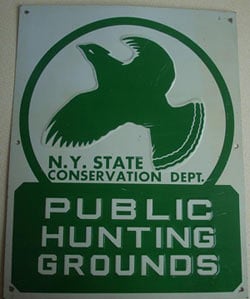 High annual dues keep some out (especially the younger sportsmen) while membership can be highly competitive, with an unhealthy dose of club politics.  At the same time environmentalists and anti-hunting groups constantly push the state to find new creative ways to close up these clubs like selling off land, traditionally leased by the club, or buying up land around the club.  Many hunters with jobs, families and other responsibilities, don’t have the time or the stomach to deal with these people.

Private eyes (are watching you)

Another popular option is to hunt on private land by permission from the owner of land.  This is generally the route hunters go if they have connections to folks with land, farmers or land holding organizations (or they just have a particularly silver tongue).  You may have great success travelling down this route, but you have to realize that most people post their land for a reason—they don’t want you hunting on it, so get used to the words, “no” if you are actively looking to hunt on private land.  You also have to realize though that this is a very popular route.

Case and point, I tried hunting a piece of private property to the south of me after getting permission from the owner, thinking I had it all figured out this year and that I would be sitting by myself until that monster 12-point casually strolled by. On opening day though, it didn’t take me long to realize this tract of land was going to be overrun with hunters.

The piece of land was only about 30-acres and in one day I counted 10 hunters ringing the property. Though a couple of people stalking the woods who are not in your hunting party can be a good thing (anything that gets the deer moving is a good thing), this number of hunters in such a small area almost guaranteed I was going to get skunked and not see any deer.

And not only is hunting so close together counter productive, it’s extremely dangerous. High caliber deer rifles can send a bullet a long way, and you could easily kill a human being if you’re shooting standard .308 or .30-06 cartridges and do not know what’s behind your target. If you don’t think this hasn’t happened before, you’re mistaken.

I have taken some nice deer from that piece of “Private” hunting real estate, but only after the two weeks of regular season.  Even still, I think that one was a fluke and I would say that if most hunters have not taken a deer from there after the first few days, they won’t because the deer get wise and move to safer pastures.

The loss of private land has left many hunters with no choice but to find good hunting ground on public land (and at the same time trying to share this land with hikers and campers). 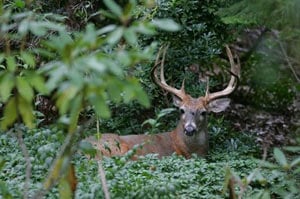 With public land I have found that the more secluded and less maintained the trails are the better the hunting is. I spent one day hunting in on several different spots for ruffed grouse.  The best spot was a muddy trail, that was at times incredibly frustrating to navigate and sporting much more undergrowth than usual.  It was out of the way, uninviting to humans and very productive in terms of birds in my bag.

I also try to stay off of some public land on the weekends, because there are more hikers and campers then. The middle of the week is the best time to make your way into the woods on public land.

Don’t forget to do some research, if you know a game warden, ask them some good spots, most of them I know will tell you some good spots to sit and when to be there. I also check maps of all the trails where I want to go and then spend some time walking them, but you need to get away from the trail to be productive. Scout them just like you would any other piece of property.

So if you see a posted sign pop up on your favorite piece of property, don’t hang up your gear, start looking around for an alternative. It’s also nice to have a back up piece of property so that if your regular stand isn’t turning out the way it used to that you have something to fall back on. You can never have too many hunting spots, and public land can really open up your options.