After a decade of lessons learned in Afghanistan and Iraq, the US Army has finished a roundup of the potential points of weakness at the squad level.  And what they want is more snipers. “We don’t want to overstate that we have a large number of issues; we think our squads are pretty doggone good,” said Col. Daniel Barnett, director of Benning’s Soldier Requirements Division.

Over time these rifles were modernized and improved with furniture and quad rails befitting a modern long-range rifle, which came to be known as the M14 Enhanced Battle Rifle (EBR). 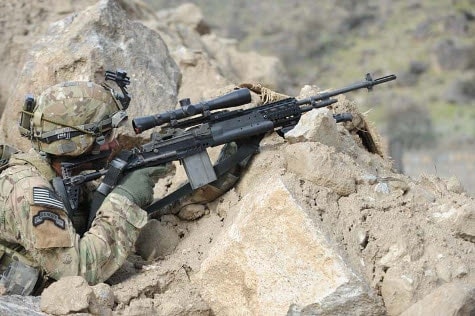 There is one major drawback of the Army’s EBR, and that’s the weight.  The EBR weighs 15 pounds unloaded.  It’s unwieldy and slows designated marksmen down.  As much as designated marksmen enjoy being able to reach out and touch someone past 800 meters, when you hear what the Army spotters and snipers are saying about the new M110 SASS, well…

The M110 is an AR-10-style battle rifle chambered in 7.62 NATO, like the EBR.  But it is considered improved in every way, with a free-floating fluted barrel that is also 2 inches longer and suppressed, quad rail handguard and not to mention AR ergonomics. 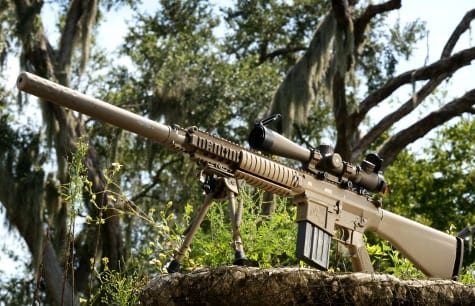 Although the M110 is an improvement, it’s not any lighter, at 15 pounds.  What the Army wants is an M110 carbine. “There is a compact version of the M110 out there, so the guy wouldn’t look quite so different than the rest of the squad,” said Barnett.

What the colonel is referring to is the M110s predecessor, the SR25, both manufactured by Knights Armament.  The M110 is a souped up SR25, an already capable precision rifle.  In its carbine configuration without the suppressor the SR25 almost passes for an M4, at least from a distance.   And the SR25 carbine weighs just 8 pounds. 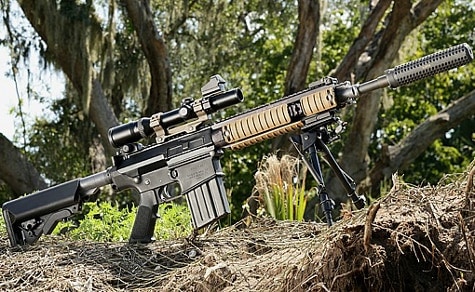 The designated marksmen aren’t the only troops the army wants to unburden with lighter guns.  One of the 22 points is centered directly on the SAW and its operator.  The M249 weighs 17 pounds not including its 5 pound belts.

One of the most promising new weapons to come from the Army’s recent Lightweight Small Arms Technology program is the LSAT machine gun, still in evaluation.  Simply known as the LSAT, this machine gun fires a completely new type of plastic-cased and linked ammunition.  While still firing 5.56 NATO bullets, these “case telescoped” rounds weigh just 3 pounds per belt.  Other details remain in the air as the machine gun completes its development.

So it would appear that 55 years after its unveiling, the military is looking to adopt the AR-10.  Introduced in 1957, the first prototype AR-10s failed US Army tests due to their experimental steel-aluminum alloy barrels (submitted over Eugene Stoner, the inventor’s objections).  We think the SR25 makes a fine choice, but there are many out there.

These are just two changes the Army is talking about making.  What rifle do you think best suits the designated marksman?