20th Anniversary of LA Race Riots Raises Question about Guns: To Own or Not to Own? (VIDEO)

Kevin Ferguson of KPCC, a public radio station based in Southern California, wrote an article that critiqued pro-gun columnists for using the Los Angeles Race Riots as a reason to support gun rights and gun ownership.

For those not familiar with the 1992 Los Angeles Civil Unrest,’ on April 29, 1992, a jury acquitted four LA Police Department officers (three white, one Hispanic) accused of using excessive force against Rodney King, a black motorist, following a high-speed chase.

News of the not guilty verdict brought tempers in downtown Los Angeles and surrounding areas to a boiling point.  The result was six days of hell: looting, assault, arson and murder.  In total, 54 people died and thousands more were injured.  Total property damage exceeded $1 billion.

During the riots video emerged of armed Korean shopkeepers and storeowners defending their property from throngs of looters.  To this day, many pro-gun advocates point to their fighting back as a reason to support gun rights.

Niles Gardiner of the Telegraph wrote, “During the Los Angeles riots in 1992, many store owners in the south central part of the city defended their property against marauding gangs with their own weapons, and succeeded in protecting their livelihoods and thousands of jobs that depended on them.”

Gardiner made this observation while juxtaposing the LA Riots with the 2011 London Riots, pointing out that British citizens were largely defenseless against attacks from the hordes of thugs.

“If they [Brits] had the right to bear arms and defend their stores with force, it would have been a very different story, and brutal looters would have met firm resistance,” Gardiner wrote.

Ferguson wrote the following with respect to the way columnists like Gardiner compare the two riots:

Never mind that the incidents were 19 years apart, the causes different, that the looting was far from indiscriminate. Or that the cities have nothing much in common other than, well, being cities. The Los Angeles riots killed 53, which is over ten times as deadly as London–1992 cost LA five times as much, too. 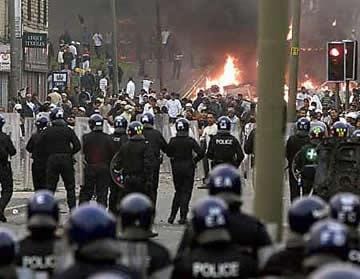 He goes on to admit that guns probably helped Korean American store owners fend off potential looters and that most who fought back had few regrets, but warned that “guns aren’t magic.”

One of our security guards [at Hannam], I met him in the morning. He’s a very good-looking guy, a French Jew. I said, ‘I’ve never seen such a good-looking security guard.’ Suddenly I heard a loud bang. Many people started shooting with guns, with pistols. I saw his whole head going up, exploding. His body slowly coming down to ground without [a] head. I got so scared. Then he was gone. And I believe it was friendly fire.

Ferguson concluded his piece by citing one more critical difference between the LA Riots and the London Riots, “during all the looting, only one of these cities had gun stores.”

In general, I agree with Ferguson’s sentiment that people shouldn’t exploit tragedies like the LA or London Riots to make political points.

But at the same time, I think they raise some fundamental questions about a free society.  Such as, are we better off armed and free?  Or unarmed and at the mercy of whatever comes our way?

The answer is pretty clear to me.  Your thoughts?