At the White House Correspondents’ Association dinner on Saturday, President Barack Obama joked about all of his Administration’s foibles and scandals, save one: the fatally flawed Operation Fast and Furious.

Obama opened his comedy routine with a reference to the “hot mic” incident, where he was caught talking about his campaign priorities with Russian President Dmitry Medvedev last month.

“What am I doing here,” he asked off stage, before taking the podium. “I’m opening for Jimmy Kimmel and telling knock-knock jokes to Kim Kardashian.”

As his speech went on, he lambasted presumptive Republican nominee Mitt Romney while poking fun at the General Services Administration scandal. 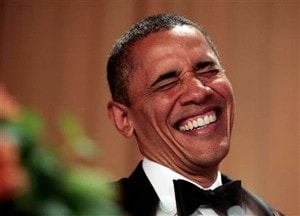 “Anyway, it’s great to be here this evening in the vast, magnificent Hilton ballroom — or what Mitt Romney would call a little fixer-upper,” he said in front of an odd mix of stars, military brass and political luminaries (which included the likes of actress Lindsey Lohan, former Secretary of State Colin Powell, House Majority Leader Eric Cantor, R-VA – just to name a few).

“I mean, look at this party. We’ve got men in tuxes, women in gowns, fine wine, first-class entertainment. I was just relieved to learn this was not a GSA conference.”

The GSA’s near-million-dollar-spending spree in Las Vegas was “unbelievable. Not even the mind reader knew what they were thinking” Obama chided.

Four years ago they were locked in a tough primary fight, Obama recalled, but now “She can’t stop drunk texting me from Cartagena” – a referring to their recent trip to the Summit of the Americas in Colombia, where Clinton was photographed drinking a beer and dancing.

And speaking of untoward behavior in Colombia, Obama took a jab at the Secret Service.

“I had a lot more material prepared, but I have to get the Secret Service home in time for their new curfew,” he joked.

But as his speech came to a close, it became clear that there would be no attempt by the President to turn Fast and Furious into a punch line.

However, the didn’t stop Jimmy Kimmel, the emcee of the event, from briefly addressing the gunrunning program.

Obama only grimaced at the joke, as if to say that’s ‘that’s no laughing matter.’ 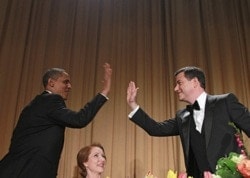 One can certainly see why Obama wouldn’t be guffawing at Kimmel’s Fast and Furious joke.  Attorney Gerneral Eric Holder – Obama’s close friend – finds himself under intense scrutiny for his mishandling of the gunwalking program that sent approximately 2,000 firearms across the border and into the hands of known Mexican drug cartels.

As Guns.com reported last week, congressional investigators are angling to charge Holder with contempt of Congress for stonewalling their probe into the fiasco that is directly linked to the death of at least one U.S. Border Patrol Agent.

Thus far, Holder and his Department of Justice have only released 6,400 of the more than 70,000 documents subpoenaed by investigators.  Nevertheless, Holder maintains that the DOJ has been fully cooperative in efforts to shed light on the failed operation.

However, Obama’s tepid response to Kimmel’s Fast and Furious joke may not only be connected to dubious fate of Eric Holder’s job security, but also to the uncertainty of his own future.

As Kimmel put it:

“There’s a term for guys like President Obama,” Kimmel said with a pause. “Probably not two terms.”