The US Army's Looking To Outfit Soldiers with Exospines (VIDEO)

The Army is considering a new approach to tackling our troops’ current load problem.  They are looking at a weight-distributing exospine to transfer the weight of a full load externally across a person’s body, not internally through a person’s back.

This is in addition to weight-reduction plans like phasing out the M14 EBR and replacing it with rifles like the M110 or SR25. 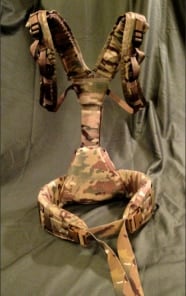 The Integrated Support Exospine (ISE) is a harness that redistributes weight down across your waist and provides a spare set of shoulders to hang equipment from.  What makes it work as well as it does is that it rotates at the spine allowing the wearer to turn and move normally, if even more naturally than with an unsupported load.

The Army has already been playing around with these since 2010, working on making them combat-ready.  According to the Military Times, “Infantry officials from Fort Benning, Ga., say that this carbon fiber, load-bearing device showed ‘great promise’ when soldiers tested it last fall during the Army Expeditionary Warfighting Experiment there.

“‘It takes the load off the soldier’s shoulders and lower back and redistributes it to hips and big leg muscles,’ said Col. Daniel Barnett, director of the Soldier Requirements Division at Benning’s Maneuver Center of Excellence. ‘The soldier feedback on that is “this is huge.”‘” Right now soldiers testing the exospine say that it has one shortcoming that will have to be tackled before it can be deployed.  The ISE doesn’t allow its wearer to look upwards enough, which means you can’t comfortably shoot guns while prone.

This is one step in the right direction.  While it is important to improve loadouts and reduce weight, in some areas materials science and modern engineering can only go so far, like with body armor, ammunition and water.  Some weight just can’t be cut.

The faster the ISE gets combat-ready the better, as soldier payload is inversely proportional to soldier safety.  But fielding this exospine or something like it is one of the main calls to action from the Army’s 22-point recent squad-level Capabilities-Based Assessment (CBA).  We’re positive that this isn’t the end for exosuits the likes of Lockheed’s HULC.

The HULC, or Human Universal Load Carrier, is a hydraulic-actuated powered suit that a person wears.  The HULC interprets body movement and assists, giving its wearer super-human strength, or at the very least, super-human endurance.  Technology like the HULC and the ISE always impresses us; not only will it protect and improve the soldier, it usually makes its way into everyday living, which means that someday, everyone can have a powered exospine.  Doesn’t that just sound cool?