Announced at SHOT Show this year, German Sport Guns (GSG) has been manufacturing StG 44 rifles chambered in .22 Long Rifle.  The StG or Sturmgewehr (literally storm rifle) 44 was one of the first true assault rifles ever made.

The original StG 44s were chambered in 7.92x33mm Kurz, an intermediate cartridge made by shortening the then-common 7.92x57mm or 8mm Mauser cartridge to make its recoil manageable in full-auto.  The StG 44 was designed in response to Nazi Germany’s experience at the receiving end of WWII-era submachine guns, like the Tommy Gun but more notably the Russian PPSh-41, which was so commonly-issued that entire Soviet rifle companies were equipped with the high-capacity submachine guns. 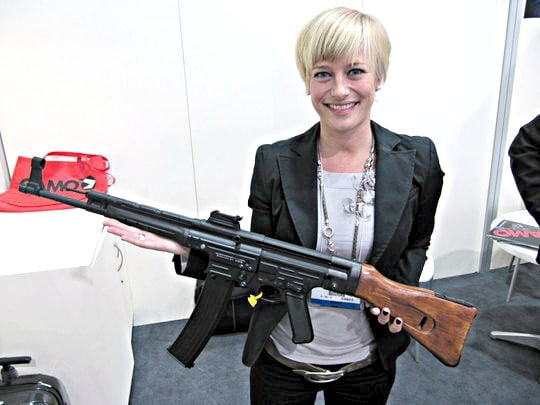 The GSG version looks and feels just like the original StG 44 but the similarity ends there.  Working on a different operating principle, the GSG StG 44 .22 Long Rifle is only inspired by the archetypal assault rifle and only shares a near-identical appearance.  The GSG StG 44 also comes with 10- or 25-round magazines in its rimfire configuration, as opposed to 30 in 7.92x33mm Kurz.

That being said even the weight is the same with this lookalike, at 9.5 pounds empty with a 17.5-inch barrel, and it delivers on the aesthetic of the era by shipping in a handmade wooden crate.  Likewise the furniture is also wood.

The full retail price on the GSG StG 44 .22 Long Rifle is $600 and we expect real-world prices to be somewhat less than that, although its status as a collectible might keep prices up a bit, until the novelty wears off anyway.

The StG 44 is absolutely a piece of history, being the first true assault rifle ever fielded by a large army.  Not just that the StG 44 went on to influence future designs as evidenced by the CETME rifle and many Heckler and Koch designs.  They’re so special and rare that even we think it’s OK if the few remaining stay in museums and collections; it’s OK to make an StG 44 a safe queen.

Which is why we really like these rimfire imitators.  Not only can you afford one, you can shoot it to your heart’s content without destroying something historic.