Response to “Sons With Guns” Photos in Huffington Post

Call me politically incorrect, but I don’t see the significance in Hans Proppe’s new “Sons With Guns” project in the Huffington Post.

For those unfamiliar with Hans Proppe, he is a German-born photographer and television producer, responsible for such made-for-TV sensations as Sole Survivor (2000), Anne Frank: The Whole Story (2001), The Path to 9/11 (2006).

Now, in looking at the photos, I understand the underlying message Proppe is trying to impart to the viewer, but for me the whole exposé falls flat.

I’ll explain why in a moment, but here’s his brief, two-paragraph introduction to the slideshow of photos:

My original text for accompanying these images was filled with the usual litany of concerns about the gun culture in America; condemnation about the belligerent NRA that continues to mythologize and cloak any attempts at sane gun control as the first measures that will trigger an avalanche of attacks on “freedom.” It has all been said before, and said better — and perhaps because this is a photo blog, the images should speak for themselves.

The final image, which may be hard to read on a computer screen, is of three men at a peace march years ago. The text on the back of his T-shirt reads: “The Gun is Mine. The Bullets are Yours. Come get em any Time.” 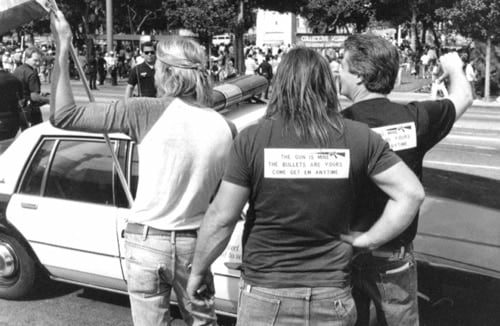 As the name of the project implies, six of the seven photos include young boys pointing or holding what appear to be toy firearms (I think all but one picture – the Asian lad wearing the Hip-Hop shirt – depict toy firearms.  To see the entire slideshow, click here).

Proppe has no captions on where or when the photos were taken.  But after sifting through the Huffpo comment section, Proppe said this about the authenticity of the pics: 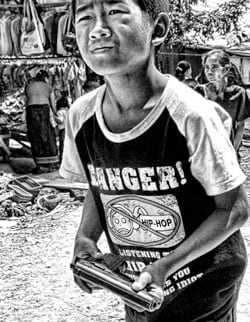 “None of them were ‘completely’ or partially ‘staged,’ not that I sense knowing that would make your little patriotic doggerel any different… Most of them were shot at a local swap meet and at a Fourth of July Parade.”

One Huffpo commenter, OldinsEye, challenged Proppe for being biased and not showing the other side of the story.

Proppe glibly responded, “Just what exactly would photographs of the ‘other side of the story’ be?”

OldinsEye gave an obvious answer, “Kids properly handling real firearms in a supervised setting; learning and practicing safety, responsibility, and respect. Not kids running around pointing (what appear in several frames to be toy) firearms at people.”

Proppe did not leave a rebuttal to this suggestion.

In my humble opinion, “Sons With Guns” has no political, social, or cultural resonance because it’s a misrepresentation of reality.  As so many Huffpo readers pointed out, it’s one-sided.  Therefore, one can conclude that those photographs were cherry-picked with the sole intention of making gun owners look irresponsible.

But I’m not even sure it accomplishes that objective.  Because, after all, who didn’t play with toy guns growing up (Cowboys and Indians, Army games, etc.)? 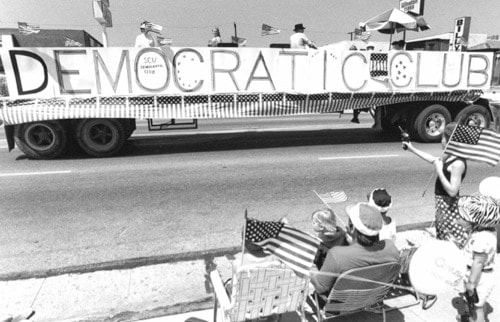 In any event, anyone can use carefully selected pictures (or videos) as a way to slant public perception about a topic, an issue, or even a website.  It’s easy.

For example, the Huffington Post recently won a Pulitzer Prize for David Wood’s reporting on severely wounded veterans returning home from Afghanistan, a 10-part series entitled, “Beyond the Battlefield.”  There’s no doubt that this was a well-deserved honor for Mr. Wood and, by extension, Huffpo for commissioning the articles.

However, if the mainstream media were to select this story, “Kate Upton Shows Terry Richardson her Cat Daddy” (which includes the video below) as a way to represent Huffpo’s journalistic pedigree, do you think they would have a problem with that?