UTS-15 Production Starting in US: The 14+1 Bullpup Shotgun

The UTS-15 12-gauge shotgun has been in production for a little over a year now although many people have never heard of it.

Manufactured by UTAS Makina (manufacturer for Kimber, Savage and Smith & Wesson) the UTS-15 is a dual-magazine-fed pump bullpup shotgun with an 18.5 inch barrel with an overall length of 29 inches and a dry weight of under 7 pounds.

At a glance similar to the Kel-Tecs KSG, functionally the UTS-15 is a very unconventional shotgun.  First up is the use of carbon-fiber reinforced polymers in its construction to keep the strength up and the weight down.

Being a bullpup, the action is in the buttstock and the trigger in front of the chamber and magazine ports.  The least conventional part about the UTS-15 is the magazine configuration.  The UTS-15 places both magazine tubes above the barrel, with the forend wrapping around the barrel.  It’s capacity is 14+1 with 2-3/4-inch shells and 12+1 with 3-inch magnums.

Although the UTS-15 ejects on the right side, the magazine tubes have independent loaded ports, one on each side.  The controls are based on those of the AR platform with a thumb safety on the left side of the grip.  The right side of the grip has controls to activate an optional light and laser module, and the topstrap is railed for optics or any other accessories. 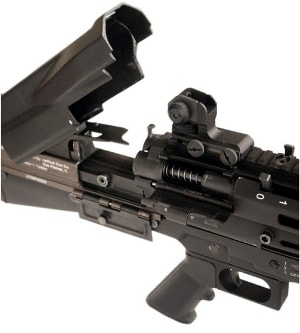 Lastly, feeding can be set between manual tube selection and alternating tube selection; unlike the KSG this process is automatic and with the loading system would make firing and reloading two types of shells, such as buckshot and slugs extremely easy to do.  Clearly this shotgun has enormous potential as a personal or duty weapon.

But no sporting purposes, says the ATF, which is why UTAS Makina will not be able to import them.  They will, however, set up a facility in Des Planes, IL, and manufacture them here in the United States.  No import rules to deal with that way.

UTAS’ Director of U.S. Operations, Matt Guzeldere stated today, “We’ve been working with UTAS Makine, Ltd. the Turkish company that developed the UTS-15, to set up American manufacturing for quite sometime.

It has been a difficult process that required building a lot of duplicate and expensive tooling, such as polymer injection molds. We have a license agreement, all of the tooling in place and have started producing parts. Of course we’ll be training personnel, running the first guns through product qualification tests and ramping up production, so we’re anticipating delivering the first American-made UTS-15’s in late May or early June.”  Retail MSRP: $1,500.  (We expect it to start around $1200 in the real world.)

Shotgunners and firearms enthusiasts everywhere should be excited.  Not only are we talking about a company with a lot of experience making these novel and outstanding shotguns, we’re talking about jobs and other benefits.  And eventually, automatic dual-magazine-fed shotguns.

UTAS plans on following up on the UTS-15 design with an automatic version, and also a modified UTS-15 design for grenades, for military and police use.  But pump first.  Excited?