In a previous article, Guns.com talked about the historic significance of the Colt Walker revolver, the gun that saved Colt.  The Walker is a 4.5-pound behemoth—a .44-caliber revolver with the power of a carbine—named after Capt. Samuel Walker—an Army officer credited for conceiving what would become the prized revolver. But where did he get the idea? 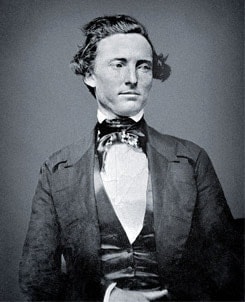 Before troops regularly carried sidearms, Walker learned the hard way what could happen if you didn’t carry enough gun. He joined the Texas Rangers in 1842—eight years after the Alamo. With the Rangers, Walker fought against the Mexican Army and the Comanche, as the young republic struggled to maintain its independence.

In 1843 Walker was part of the Mier Expedition, an unsuccessful military operation where members of the Texas militia were sent into Mexico in retaliation for continued harassment from the Mexican Army.  But Walker and some 175 other Rangers were captured and imprisoned.

Antonio Lopez de Santa Anna, soldier and five-time president of Mexico, ordered that some of the Texans be executed.  The Rangers were forced to draw dried beans from a pot.  A white bean meant clemency and a black bean meant death.

Walker drew a white bean, but 17 Rangers were not so lucky.  They were executed by a firing squad and Walker and the others were eventually freed.

When they fought with sidearms

The next year after Walker gained his freedom, Walker with 14 other Rangers were pitted against 80 Comanche in the Battle at Walker’s Creek.  This time the Texans were armed with Colt’s five shot Paterson.  This is considered by many to be the first use of revolvers in battle and it forever changed battlefield tactics.  In the age of single shot muzzleloaders, the revolver’s extra firepower proved to have a clear advantage.

The Rangers were able to keep heavy firepower on the Comanche and repulse several counterattacks with them. The Rangers were said to have “had a shot for every finger on the hand” during the hour-long battle.

Although the Paterson worked, they still had their limitations.  Walker used the Paterson in combat, so he knew and understood the good and the bad of the design.  For instance, there is no trigger guard on the Paterson and when it is cocked the trigger folds down.  It’s awkward and delicate. With a charge that compares closely to that of a .38, the .36-caliber pistol was also underpowered for firefights Walker knew he would encounter.

When the United States went to war with Mexico in 1846, Walker was ready to fight. Early in the war he fought at the battles of Palo Alto, Resaca de la Palma and Monterey. Later that year he was made Captain of a company of Texas Mounted Rifles and went east to recruit soldiers for his command.

During his trip, Walker met with Samuel Colt to discuss improvements to the Paterson design and Walker knew what he wanted.

He told Colt he needed a bigger, more durable and more powerful gun.  He wanted revolvers that could be carried in saddle holsters.  Walker’s Mounted Rifles were to be armed with two each, giving them 12 shots before reloading at a time when most soldiers had one. And Colt had no choice but to listen.  At the time the company was hurting and in desperate need of steady work.

The Walker, was designed for hard military use.  Instead of the Patterson’s 22 grains of black powder, the Walker’s load was 60. It could take a horse out from under a rider at 100 yards.  And it had a trigger guard.

Return to the War 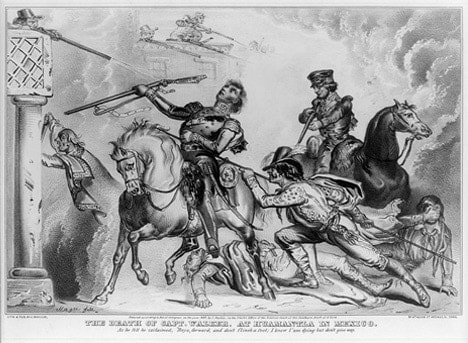 In October of 1847, Walker and his company escorted a supply train headed towards Mexico City. Outside of Huamantla they met a sizable Mexican guerrilla force.  Reports say that Samuel Walker was either shot in the back or was killed by a lance.

Legend says that he fell with a Walker in each hand.

Yet, Samuel Walker left us with a lasting legacy.  The Walker is considered to be the first magnum revolver.  Most of the design changes that were incorporated into Colt’s Walker, were carried over to its successors. If it wasn’t for Samuel Walker we would not have the Colt Firearm company as we know it today.