A few days ago, Guns.com published an article about a Maryland County’s attempt to pass a Gun Offender Registry Act (GORA).

Upon hearing news of this, I thought to myself: “where have I heard of this before?”

It didn’t take me long to realize that it had New York City Mayor Michael Bloomberg’s fingerprints all over it.

In fact, Bloomberg was the first Mayor to sign a GORA into law in his city, in 2006.  Mayor Dixon of Baltimore followed suit in 2007.

Okay, so what is a GORA?

According to the Mayors Against Illegal Guns’ website, which doesn’t officially endorse GORAs but openly promulgates their utility, GORAs work in the following way: 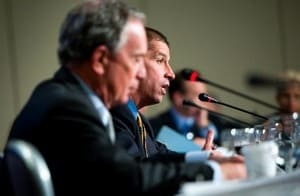 •    Requirements: Gun Offender Registry Acts (GORAs), like those passed in Baltimore in 2007 and New York City in 2006, require defendants convicted of specified gun crimes to:
o    Register their addresses with the police;
o    Verify them in person every 6 months; and
o    Promptly notify the police if they change addresses for a period of time following their conviction or period of incarceration.

•    Covered gun crimes: Each city’s ordinance lists the specific crimes that trigger reporting because they are tied to high recidivism rates in data about that city.

•    Duration: A person remains on the Gun Offender Registry for a period of years – three in Baltimore, four in New York City – from the date of conviction or release from imprisonment, whichever is later.

•    Penalties: In both cities, failure to abide by these conditions is a misdemeanor punishable by up to one year in jail or a fine up to $1000 or both.

•    Analogue: GORAs build upon Megan’s Laws, which have proven to be effective enforcement tools against sex offenders around the country.

To justify their existence, MAIG states the following:

•    Recent Baltimore statistics show that 42% of defendants charged with felony gun crimes have prior gun arrests.

I’d be curious to examine those studies and their respective findings  (no link to the studies was provided).

Nevertheless, let’s assume those stats are accurate and proceed with an honest evaluation of GORAs.

From my perspective, any gun law should be – at the very least – examined using a simple three-question rubric:

A.  Is it effective?

B.  How does it impact law-abiding gun owners (what are unintended consequences)?

C.  Considering A&B, is it viable?

To look at the first question – is it effective? – MAIG does not say (except for the brief Megan’s law comment).  One would think that it would have another study (albeit, even another ‘linkless’ study) to show how gun crime has decreased with the passage of the GORA.

To be fair, on the whole, gun crime has decreased in NYC over the past 6 years, but how much of that is the GORA and how much of that is due to tougher sentencing standards for gun offenders (In 2006, New York reclassified the offense of carrying an illegal, loaded firearm as a felony with a 3 ½ year minimum sentence) is unclear.

With that said though, I could not find a study that directly links the passage of a GORA to a reduction in gun crime in either NYC or Baltimore.

So, the efficacy of a GORA is, at least until further notice, dubious.

The question of how a GORA effects law-abiding gun owners is almost a self-defeating question.  After all, if one is a “gun offender” they’re no longer considered “law-abiding.”

But, what I mean to ask is, what are the unintended consequences of a GORA?  Also, how does one define “gun crime?”

To take the second question first, you’ll notice the vague way in which gun crime is defined and left open to the discretion of the city, “Each city’s ordinance lists the specific crimes that trigger reporting because they are tied to high recidivism rates in data about that city.”

[In that Maryland County version (Prince George’s County), they’ve defined a gun crime as “everything from use of a handgun in commission of a crime to reckless endangerment to the removal of the serial number on a firearm to illegally transporting firearms.”]

While one would assume that only serious offenses would fall under the term “gun crime,” it’s not difficult to imagine a situation where small, ticky-tack offenses are included at the behest of pro-gun control city officials, e.g.: a CCW holder unknowingly carries into a building that forbids concealed weapons, a hunter violates some obscure hunting law, etc.

The problem that this creates for those who are convicted of some ticky-tack gun crime, is that once their name is put in a registry, it exists there in perpetuity (even if it’s removed, in today’s Internet age, it will remain in Google searches, etc).  From that day forward, they’re known as “gun offenders.”

The bottom line is that “gun crime” is a vague term, one that can be expanded and manipulated to include almost anything.  And until the term is clearly defined, one should be wary of GORAs.

Overall, and in conclusion, given the analysis in questions A & B, it seems to me that GORAs are not viable – at least not at this point in time.  There are just too many uncertainties.