Custom Handguns on a Budget: Cheap tricks for slick guns

To this gunnie, there are few things finer than a custom handgun yet it troubles me to think that when most people hear that phrase “custom gun” (much less consider purchasing one), they immediately picture some gold engraved “memento” revolver that costs as much as a down payment on a new house or a race ready semi-auto pistol set up for some serious hi-end competition (with a price to match).  Believe it or not, there are custom handguns out there that won’t break the bank mostly because you can easily (well, sometimes easily) customize them yourself.

Give it a little elbow grease and little brain power and you can make a gun look just as nice as it shoots.

What’s custom about it?

In the scope of this article, a “custom handgun” is any handgun that started life as a factory model but has since, because of modifications, ceased to be considered “factory” standard.  Like installing a lift kit or bigger tires on a truck, customizations have to add a new (though not necessary) performance feature or enhance an existing one on any platform they are applied to.  Sure, you could have gotten the job done with the piece of metal that came off the belt-line, but those little tweaks make the final product better on range or easier on the eyes.

Handguns are the same way

My first custom handgun didn’t cost me a lot of money (mostly because it was used) but by the time I was done with it, it looked as good as it shot.  It was a Smith & Wesson Model 25 Mountain Gun in .45 Colt and when I first got it to the range, the thing shot ok, but left me with that nagging feeling I needed a little bit more.  I’m sure you readers have experienced this before—it was clear during my session that the gun was performing, it just gave me the indication it could perform better, and the first place I started, and the place I usually start when it comes to customizing a handguns, was the trigger.

I gave my revolver a trigger job, put on a better set of grips and then added a nice fiber optic front sight from SDM and a white outline rear sight to really spruce up the look. When I was done I had put no more than $200 on top of the original cost of the gun, and it for years it remained one of the nicer revolvers I owned until one day someone else came along who wanted it a lot more than I did and made me an offer I couldn’t pass up.

I did the trigger job myself on that gun, which is a concept that frightens a lot of shooters, especially new shooters, so a word of encouragement and a word of caution on this point. Performing a trigger job yourself is definitely not nuclear physics, but do realize you can potentially damage your gun. So if you’re nervous, just don’t fret it—the average gunsmith will charge you about $60 bucks for one and that’s not a lot of money for something that can dramatically change the performance of your piece.

Trigger jobs are indicative of a class of a number of custom features that are totally undetectable just by looking at the gun. I once got to test fire a friend’s Glock 21 pistol. It looked exactly like every other Glock 21 I’d ever seen, except that it had a 3.5 pound trigger and a custom barrel. At 25 yards it was capable of one-inch groups with any ammo that could we fired from it (and we had a rainbow of bullet makers), a true race ready gun if there ever was one.

Necessity is the mother of customization

Some custom revolvers are born out of necessity—often thrifty fixes aimed at keeping your gun in your gun cabinet and not the glass case at your local gun shop. 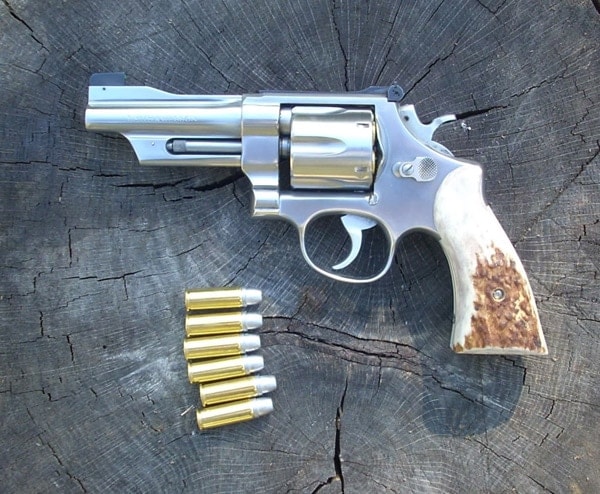 I received a Smith & Wesson 624 that the previous owner had not taken care of: the timing was a little off and there was a slight ding on the very front of one of the cylinder flutes. That ding actually interfered with the cylinder gap, so I sent it out to Bowen Classic Arms for a black powder style chamfer, which set me back about $75. When I got it back, the gun worked great and looked good too. I then drilled a hole in an aftermarket front sight and added some cheap glow in the dark paint.  You can use nail polish, probably the cheapest customization with the most immediate results that you can make to a handgun.  Total investment, about $75 dollars.

A custom handgun can be a wonderful thing but they don’t need to cost you more money than you can afford. In fact it always seems like I’ve got a custom gun in my workshop, the latest an old Smith & Wesson Outdoorsman.  It was worn out and a bit rusty when I found it but a custom set of grips, a trigger shoe and some polishing of the action has, in my opinion, unleashed an old workhorse from 50 years of mediocrity and turned it into one heck of a pretty shooter.

Soon I hope to add a brass or ivory bead to the front sight. You might have a handgun of yours that looks a little drab or just needs something to make it just right. Give it that added flair and you will have yourself a custom gun that will be a reflection of you and yours alone.