The US Army is looking to add a new capability to their already extremely successful and popular M230 autocannon.  The M230 chain gun is used in a good number of gunships and is currently being adapted for naval use as well.  What the Army is looking for is a new ammo feeding system for these exceptional weapons.

The Army wants the ability for gunners to select which type of ammo they will be firing on the fly, as opposed to the current system, which is to load the ammo in a mix, alternating between high-explosive (HE) Armament Development, Enfield/Direction Etude Fabrication (ADEN/DEFA) and high-explosive dual-purpose (HEDP) 30x113mm autocannon rounds. 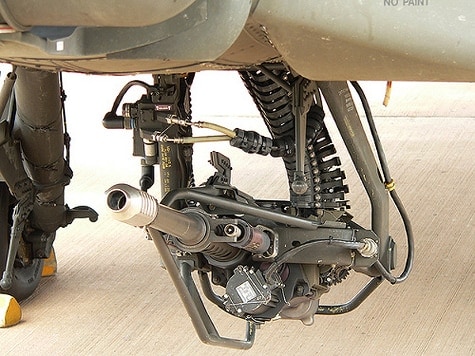 While primarily loaded with the armor-piercing HEDP cartridges, which do have a lethal blast radius of about ten feet, the ADEN/DEFA cartridges do much better against unarmored, non-materiel targets.  You know, dudes.  But the Army wants a more ammo-efficient system.  Currently, the M230 chain gun feeds from a single magazine/flat pack full of ammo.  What they want is a system with two magazines with the ability to select from which magazine to shoot from.

Such a system is expected to reduce a gunship’s total autocannon magazine capacity by a third, from 1,200 rounds to 400 in each magazine totaling 800 rounds of ammo.  But seeing how they’re currently firing two rounds for every round they want on-target, this would give them a longer-lasting, more specialized payload. 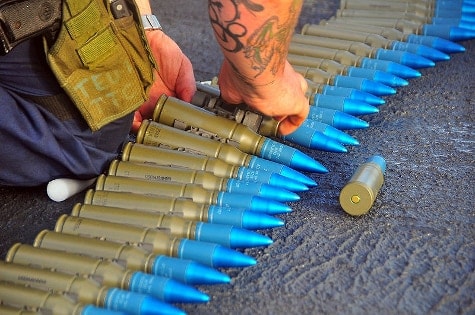 According to Wired, “Today’s machine guns and autocannons use ammunition belts that are pre-loaded with a mix of munitions—from incendiary rounds to tracers. ‘These mixes are always a compromise and may not be optimum for a particular engagement,’ the Army notes. Some guns, like the 242 Bushmaster, use dual-feed mechanisms to introduce a bit of flexibility. Previous efforts to build a choose-your-own-ammo system, like [the] 1977 trial, have generally gone nowhere. The guns jammed up too quickly.

“But that was back in days before advanced sensors and algorithms could help machines efficiently sort and pack items, from warehouse packages to farm produce. The Army is hoping to use the same smarts to inventory and pick out ammunition at ultra-high speed. Think of it as a dial-a-bullet device.”

This would also let the Army load one magazine with the futuristic-sounding but real-world laser-guided bullets.  Designed at Sandia Labs and unveiled just a couple of months ago, the laser-guided bullet is a real thing, with current prototypes shooting sub-MOA at over a mile.

The laser-guided bullet is flanged with four fins for straight flight, like a dart, which are encased in a plastic sabot that falls off as soon as the bullet leaves its smooth-bore barrel. The bullet has internal electromagnetic actuators that correct its flight; it doesn’t need to spin, it stabilizes itself. “The natural body frequency of this bullet is about 30 hertz, so we can make corrections 30 times per second. That means we can overcorrect, so we don’t have to be as precise each time,” said Red Jones, one of the projects lead researchers.

Of course, while the Army is looking to add new function to their autocannons, the Navy is just happy to have them at all.  Just a few weeks ago the US Navy announced that they have modified the M230, the M230LF, to work with their gunships.  Because the systems have to withstand a great deal more wet then the Army’s, the M230LF has some significant changes to its method of operation.

But you can be damn sure it still shoots the 30x113mm cartridges.