Pentagon Halted Involvement with “The Avengers” Because of Its ‘Unreality’

If you went to the movies this past weekend, there’s a good chance you went to go see Marvel Studio’s record-breaking movie “The Avengers.”  If you haven’t heard the news, this mega-blockbuster about a motley-looking crew consisting of Norse Gods, superheroes and Scarlet Johansson crushed U.S. box-office records with $207.4 million in weekend ticket sales.

To give you an idea of how epic it was, “The Avengers” destroyed the previous-best opening weekend of $162.2 million in the U.S. and Canada, set last year by the final installment of the Harry Potter franchise: “Harry Potter and the Deathly Hallows: Part 2.”

“Two hundred million is a staggering number,” said Jeff Bock, box-office analyst at researcher Exhibitor Relations Co told Bloomberg News. “This is definitely the kind of momentum that’s going to carry over and ride the wave through summer.”

Although, admittedly, I didn’t go see the film after reading the following warning from New Yorker critic Anthony Lane, “If you are not a Marvel fan, on the other hand, then watching “The Avengers” will feel like being mugged by a gang of rowdy sociopaths with high muscle tone.”

As you might have guessed from the Lane citation, I’m not really a Marvel fan.  And, according to a story in Wired, neither is the Pentagon.

“We couldn’t reconcile the unreality of this international organization and our place in it,” Strub, told Danger Room (Wired). “To whom did S.H.I.E.L.D. answer? Did we work for S.H.I.E.L.D.? We hit that roadblock and decided we couldn’t do anything” with the film.

For those that don’t know, S.H.I.E.L.D. is the Strategic Hazard Intervention Espionage Logistics Directorate, formerly known as the Supreme Headquarters, International Espionage, Law-Enforcement Division.  In other words, it’s fictitious military entity that the Pentagon could not make sense of. 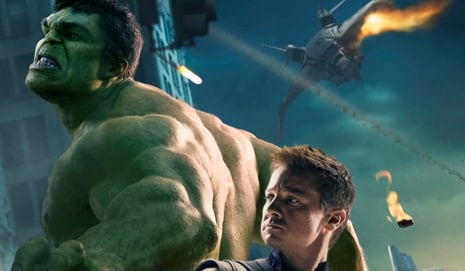 As Wired pointed out, typically the military loves to insert itself within Hollywood blockbusters.  One will recall how “Iron Man” got into a dogfight with F-22 Raptors in the original movie or how the Navy gave the producers of “Act of Valor” unprecedented access to real SEALs, many of whom actually starred in the movie.

But for “The Avengers” the military passed (although, they did allow producers to briefly film Humvees for a scene).  At the end of the day, the uncertainty surrounding S.H.I.E.LD. proved to be too much.

“It just got to the point where it didn’t make any sense,” Strub lamented.

Perhaps, the ‘unreality’ argument is true.  But after reading some more reviews on the film, I found this interesting observation from Richard Brody, which may provide additional insight:

It’s worth noting that the movie runs on something of an original sin: the attempt by the American military to weaponize a new and unprecedented source of energy (which, of course, is then stolen by the enemy, who deploys it against Americans). It’s yet another trope borrowed from the history and the politics of the Second World War—the development of nuclear weapons—that plays into the spirit of contemporary politics (namely, the expectation of military solutions to potentially apocalyptic problems). And the military is, ultimately, unable to help. The city can only be saved by our gods—and by their good relations with the gods of others.

Factoring this into the equation, one could argue that the Pentagon backed off not because the film’s treatment of the military made so little sense, but because it hit too close to home.