Room Clearing 101: Five things you should know about Close-Quarters Combat

Clearing buildings has been called both Close-Quarters Battle (CQB) and Close-Quarters Combat (CQC) but the truth is that regardless of what you call it, the principles and premises you need to clear a room safely and successfully are pretty much the same regardless of the situation, from the techniques used by elite special operations (like the kind who took down Osama bin Laden) to those of the local neighborhood police drug task force. This is good news for civilian shooters who can acquire effective tactics for indoor defense by adopting the guiding principles of speed, surprise and violence of action.  So, let’s take a look at five universals when if comes to room clearing:

Room clearing should always be done by at least two shooters. Because there are so many unknowns and way too many dangerous angles to be cleared immediately by one person, two shooters are needed, at a minimum. It’s been said that “Two is one, and one is none.” With at least two shooters, you can maintain 360-degree coverage. And remember team trust is absolute so practice, practice and practice, together.

Unless the plan is to breach a wall, the likely place of entry into a potentially hostile room is through the door. The door is referred to as the “fatal funnel.” Anyone expecting an armed intrusion will be focusing attention and firepower towards the place of entry. Getting into and out of the fatal funnel is essential to success so if someone in front of you trips, walk over them. 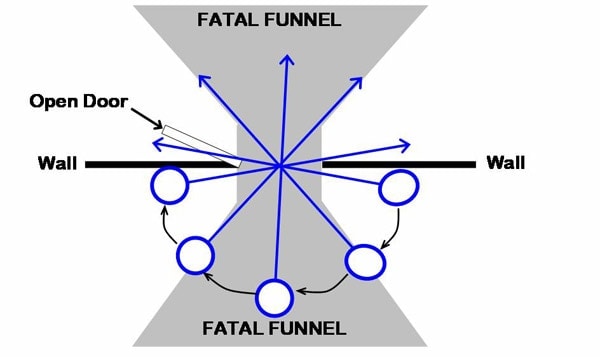 If there’s time for a plan and rehearsal hours prior to the execution phase, do it; but remember to be flexible. Once inside, things have a tendency to change based on new information and real or perceived threats. Instead of planning on who goes left or right (criss-cross or button-hook) once inside the door, follow this simple rule of thumb: go the opposite way that the person in front of you went. In a hasty entry, you’ll never have time to plan anyway. Again, go the opposite way through the door that the person in front of you went.

Get through the fatal funnel, then clear the near corner. You have to be close on the heels of the guy/gal in front of you or you won’t be able to protect his/her backside as soon as they’re in the building. The key here is to maintain personal responsibility for your area and sectors of fire—the field of vision you can feasibly shoot at accurately.  Accordingly, wherever your muzzle goes, that’s where your eyes should be. Think eyes, muzzle, target. 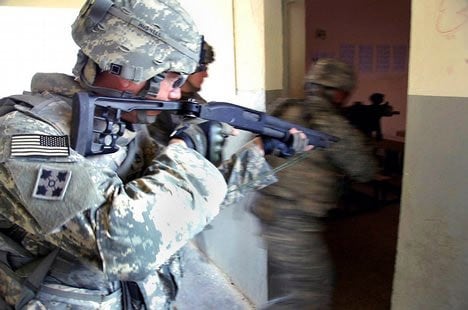 In CQB, speed matters. Get through the door, clear the near corner (or “dig” the corner by walking close to it), walk the walls, and look for the next threat. The greatest threat may be a person, but it’s also any uncleared areas.

Finally, as you’re “running” the walls, it’s really walking. If you have to shoot on the move, only move as fast as you can shoot accurately. Don’t be in such a hurry that you’re out of control. You’re there to control the situation. Be smooth. Here’s an old tactical saying to put in your toolbox: “Smooth is fast and fast is smooth.”

Remember, don’t shoot fast, discern fast and then shoot quickly and accurately if you are justified.  Keep shooting until the threat stops.