A few days ago German newspaper Der Spiegel published an excerpt from internal German defense administration documents that painted a very gloomy picture of the G36 service rifle, stating that it is incapable of effective fire outside 200 meters with a hot barrel, and that even outside of 100 meters effective fire will be difficult, and that it’s flat-out ineffective beyond 300 meters.  Is there much truth to this?

Of course there is a small truth at the core, and Heckler & Koch owned up to the limitations of the G36 rifles currently in service with the German military as well as other agencies in over 30 different countries in their well-organized 13-point press release.

The G36 is a compact short-stroke piston-operated assault rifle with a folding stock.  It uses proprietary 30-round magazines (STANAG adapters are available) and is chambered in 5.56 NATO.  Models vary in length and barrel weight, although all are lightweight carbine barrels ranging from 9 to 19 inches.  In it’s shortest configuration it weighs just 6.2 pounds.  Most commonly the G36 is issued with a 12.5-inch barrel.

You don’t have to be in the Bundeswehr (German army) to know that a 5.56 rifle with a 12.5-inch pencil barrel is going to have issues at longer ranges.  Not only does Heckler & Koch not deny this, they plainly state that the G36 isn’t intended for shooting beyond 300 meters, period.  That’s why the army has snipers.  (Point nine.)

Also Bilde.de says that the G36 can’t group safely or effectively after dumping five mags through it, a full compliment for German soldiers, or 150 rounds.  Not to put too fine a point on it, but that’s because the soldier is now out of ammo.

Jokes aside, that’s just not uncommon for many rifles.  Hot barrels alter groups.  The G36, like most infantry rifles, is not a light machine gun and isn’t intended to fill that role.  The fact that it can shoot full-auto doesn’t mean that it is only used that way.

The G36 is more than just a lightweight service rifle.  It really is an extremely modern design, first fielded in 1995, and it makes extensive use of carbon-fiber and polymer in its design.  It may have its shortcomings, and it may be best known as the service rifle of countries that don’t fight wars, but all firearms have trade-offs and in the right light a limitation in one way is a feature in another.

It’s been in service for more than a decade and has held up well in Afghanistan, being the standard infantry rifle of the German soldiers out there with us.  If it’s inadequacies were so grave they would have become clear ten years ago.  (Point four.)  What this illustrates is that alarmist press doesn’t just strike American gun companies.  Heckler & Koch’s response was very well-done. 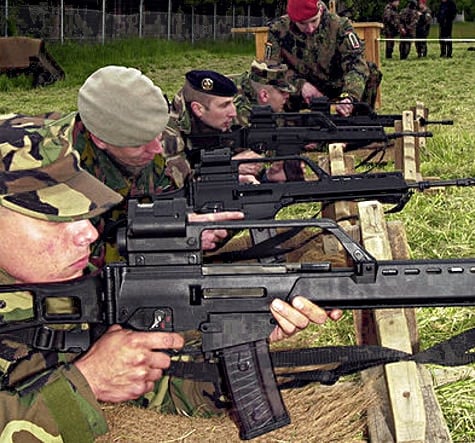 We will, however, ask one thing of Heckler & Koch and the Bundeswehr: you can’t really expect us to believe you’re hammering the ten ring with this chin weld, can you?