The Lewis Machine & Tool Company (LMT) has partnered with the Sportsman Channel’s own “Pig Man”, Brian Quaca.  Together they’ve put together one very modern sporting rifle.  Using the AR-10 pattern as a starting point, LMT has put together a gun that is more than capable of dispatching hogs.

It’s called the “Pig Package” and it’s based on LMT’s outstanding Signature Model Modular Weapon System (MWS) .308 Winchester rifle.  Like the MWS the Pig Package is chambered in .308 and has a compact 16-inch barrel.  It’s chrome-lined with a 1:10 twist.  The Pig Package shares the tactical charging handle and LMT two-stage trigger.

In fact, when you take a step back, almost everything about the Pig Package is identical to the MWS, down to the white and red highlights in the receivers.  They have the same monolithic upper, the same SOPMOD furniture, and the same ambidextrous safety selector.  It comes with one 20-round PMAG, a sling, and detachable iron sights (not pictured).  Two things make the Pig Package stand apart from the MWS.  It comes from the factory with a Leupold VX-R HIG 1.25-4x20mm Hog riflescope, and it has a neat little Pig Man logo laser-etched onto the magazine well. 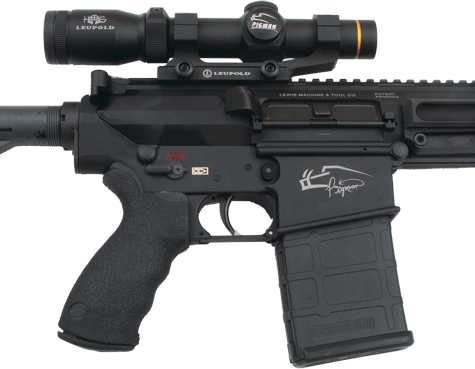 And we actually really like that.  the LMT MWS really is a terrific .308 platform and all of its variants are worth looking in to, even if you’re not looking for a hog rifle.  Well capable of sub-MOA accuracy even out to 800 yards the LMT MWS has been put into service by both the US military as well as the UK defense ministry.  Change, in the case of the MWS, would be a bad thing.

“I knew straight out of the gate that LMT folks were serious players,” Brian Quaca said. “These are the weapons residing in the hands of our US men and women on the front lines across the world, and if it’s dependable and accurate enough to defend our freedom, I have no hesitation dusting a few dozen pigs with it in the field.” 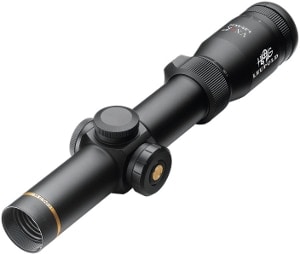 The Leupold riflescope is a nice pig-specific touch. It features a Pig Plex reticle with a center FireDot powered by ambient light channeled into it via fiber-optic light pipes.  In the dark the FireDot, motion-activated, powers on automatically to keep the reticle nice and bright.   The scope is mounted to the rifle with a Mark 2 IMS mount, too.  All said and done that’s about $600 in glass and hardware.

It can’t be said that the Pick Package is a no-nonsense high-speed low-drag operator’s gun.  Which while it does have a little of that going for it, particularly with its monolithic quad rail, the Pig Package is definitely a boisterous, downright gregarious hunting or even competition shooting rifle.

So whether you’re looking to dispatch some animals, pick up an out-of-the-box-ready big bore competition rifle, or just a fan of the Pig Man and his upcoming TV show, you might want to consider the Pig Package.  Steel yourself, though, nothing LMT makes is for the strapped.  The Pig Package has an MSRP of $3,490.