Testing Raytheon's Excalibur: Artillery Accurate to 5 Meters at Over 20 Miles Away

Raytheon is testing the latest in advanced “smart” artillery.  Part shell and part guided missile, the M982 Excalibur is a fin-stabilized artillery projectile that can be guided remotely via GPS coupled with inertia monitering.  Not only does the M982 show remarkable accuracy at incredible distances, the Excalibur can be fired from your run-of-the-mill 155mm Howitzers. 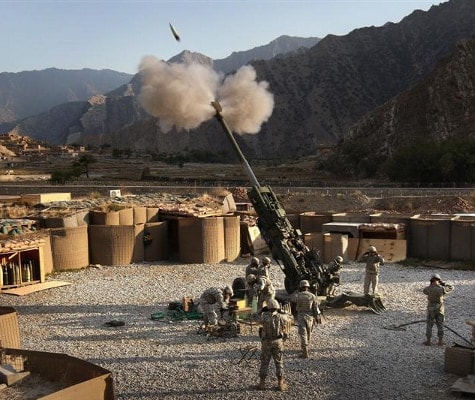 With accuracy like that, a Howitzer crew can support troops more effectively and land pinpoint fire on targets on the move.  Which is precisely what this weapon was designed for, to make “danger close” a little less, and to make chasing after enemies, well, optional.  It also means that the Excalibur may prove effective in urban environments.

The Excalibur project is joined by BAE Systems as well.  Raytheon is in charge of the guidance system and BAE the shell and the payload.  Which is another thing remarkable about the Excalibur.  It can carry different payloads, from conventional dual-purpose high-explosive warheads to anti-armor “unitary” warheads which can be fired essentially straight up and straight back down.  They can also be detonated manually, after being “placed” (shot into a precision array from twenty miles off).

Raytheon has also considered arming it with a payload of small bombs in clusters and releasing them over an area as the M982 shell passes overhead. “We’ve got to start thinking of precision in a whole new way,” said Jim Riley, Raytheon Missile Systems vice president of Land Combat. “We’re used to thinking in terms of the circular error of probability (CEP), but precision is the way of the future.

“CEP doesn’t limit collateral damage, nor does it keep our warfighters safe. Excalibur’s proven precision is not only effective, it’s essential for the protection of combat forces and civilians.”

The weapon system has been demonstrated by the US Army in multiple scenarios, designed to defeat specific point targets at the tactical level, while avoiding damage to structures, non-combatants and friendly forces.  Also revealed in the demonstrations was that significantly fewer Excalibur rounds are required to destroy a target, reducing the logistics burden as a result.