ARES Defense Updates their SHRIKE: the AR Upper that Uses Magazines and Belts

While it might strike some people as novel the ARES-16 AMG is actually designed to bring SAW firepower to a package as light and maneuverable as an M4 rifle.  That is to say, an M4 rifle with a box of ammo hanging off the magazine well adapter.

Taking a cue from the SAW and other light machine guns the Shrike uses a short-stroke tappet gas piston system and features an interchangeable barrel system appropriate for its role in combat. “We have spent countless hours refining and perfecting the SHRIKE design, ultimately leading to the unique offering available today,” said Geoffrey Herring, President of ARES Defense Systems, Inc. “Our research and development team is confident that the mission-configurable [ARES-16 AMG] delivers on our promise of an innovative weapons system that will exceed the performance standards required by users in the field.”

Technically ARES is re-announcing the Shrike, as they have had a different version of the  ARES-16 AMG available for some time now.  It maintains most of the same Shrike features, including the folding side charging handle and gas piston system and optional array of different railed topcovers to allow the machine gunner to customize his weapon (including a top cover that converts the Shrike to work with just magazines while maintaining the machine gun gas piston system).

The update comprises of a new quad rail handguard made of mil-spec hard-anodized aluminum that is raised to the same plane as the topcover’s rail.  This allows the gunner to use an even broader array of accessories with the  ARES-16 AMG, such as a red dot optic along with a flip-away magnifier.

The  ARES-16 AMG does a good job of combining the SAW’s ability to lay down covering fire as well as maintaining the looks and ergonomics of a traditional M4 rifle, while keeping the overall weight down to an absolute minimum.  With a short heavy-profile barrel, the Shrike weighs just 7.4 pounds.

The  ARES-16 AMG is intended for military use but if you have five or six large squirreled away you can probably convince someone to let you have one.  Shrike will also be happy to outfit you with a wide array of accessories including very close-quarters 10.5-inch barrels.  It comes in three basic models,

If you could have a light machine gun, would you get a Shrike?  Or even consider one for a semi-automatic rifle? 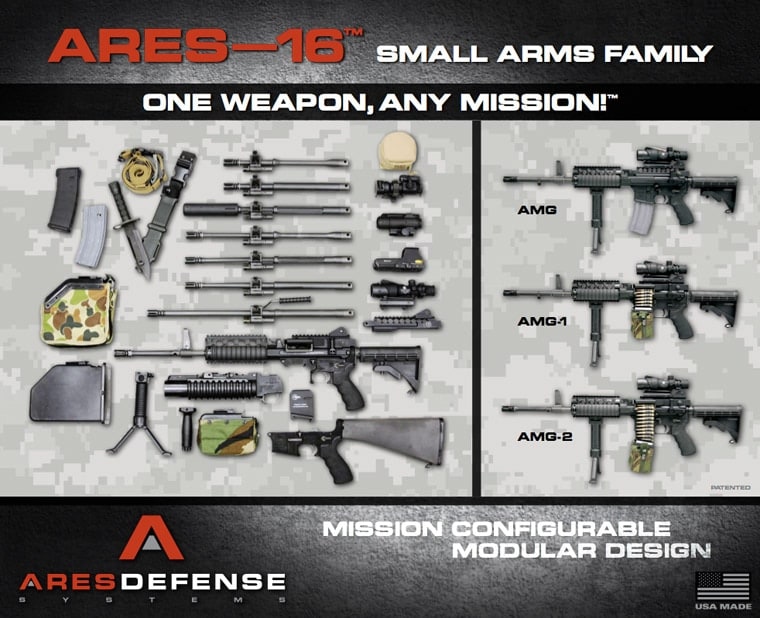