Kel-Tec started showing off a little bit of their latest shotgun, the KSG Shortie.  The KSG, or Kel-Tec Shot Gun, was announced early last year and became available, after much anticipation, on the eve of 2011.  The KSG is a dual magazine-fed pump shotgun with an impressive capacity of 7+7+1 rounds of 2-3/4-inch shot shells (6+6+1 with 3-inch magnum shells). 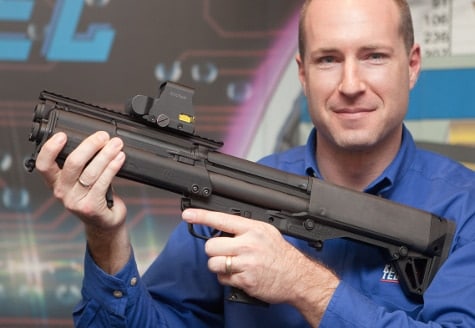 While the KSG has become incredibly popular with regular people everywhere, Kel-Tec did develop these shotguns with the hope that would be adopted by law enforcement, not just civilians.  One main feature of the KSG is the ability to select which magazine to load from, so it would be possible to use it as an entry weapon, for example having one magazine loaded with breaching shot and the other with defensive shot.

Another interesting thing about the KSG is that it is a bullpup shotgun, with the action behind the trigger for an incredibly short package of of a hair over 26 inches overall.  That is an important number because anything less than 26 inches, or having a barrel length of under 18 inches, and the shotgun would become a National Firearms Act (NFA)-regulated short-barreled shotgun (SBS). 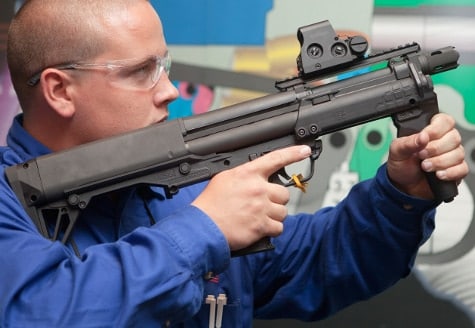 Stores have not been able to keep KSGs in stock, and according to Cheaper than Dirt, Kel-Tec is producing 1,000 of these shotguns per month.  So it would make sense to expand on the line with other models.  These will be NFA-regulated SBSes.

At least two models of these new Shorties have been whipped up, a medium-length 14-inch model and a super-Shortie 10-inch KSG.  The 14-inch model has a capacity of 6+6+1 with 2-3/4-inch shells and the 10-inch 5+5+1.  That quite a lot of shot for a package the size of a personal defense weapon (PDW) or submachine gun—not to mention a lot more compact than most with its bullpup configuration.

These will likely see more police-centric marketing and people are already saying these would be handy to keep up front in a squad car.  No doubt these will have the side benefit of having to wait six months on store walls for the NFA application to go through; people will finally have the chance to see KSGs in person.

We also hope they have worked out the kinks we ran into when we first reviewed the KSG.