In an effort to capitalize off of the shooting of Trayvon Martin, an unidentified online retailer sold gun range targets depicting a faceless, hooded figure holding a bag Skittles candy and a bottle of iced tea – items Trayvon was carrying when he was killed by neighborhood watch volunteer George Zimmerman.

“The response is overwhelming, the seller told CBS affiliate WKMG in an email.  “I sold out in two days.”

WKMG could not identify the seller, but the targets showed up on a Gunbroker.com webpage.  They were being sold in packs of 10 for $8 by a seller named “hillerarmco” from Virginia Beach, VA.

Everyone knows the story of Zimmerman and Martin. Obviously we support Zimmerman and believe he is innocent and that he shot a thug. Each target is printed on thick, high quality poster paper with a matte finish! The dimensions are 12″x18″ (The same as Darkotic Zombie Targets) This is a Ten Pack of Targets. 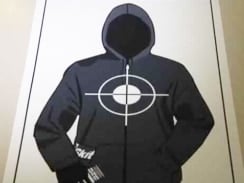 A Google search on “hillerarmco” turned up a company called the Hiller Armament Company.  However, not much else is known and the domain name Hillerarmco.com has been deactivated.

As for the impetus behind the Trayvon Targets, the seller told WKMG, that his/her “main motivation was to make money off the controversy.”

Zimmerman’s defense attorney, Mark O’Mara, voiced his outrage over the targets to WKMG.

“This is the highest level of disgust and the lowest level of civility,” said O’Mara (see video). O’Mara expressed concern about how Martin’s parents will respond to a shooting target designed to resemble their son.

O’Mara also called the sale of the targets “hate-mongering,” adding that it would only make it more difficult to try the case.

Zimmerman has been charged with second-degree murder, he is now awaiting trial.

With the media firestorm surrounding the case, and with bone-headed stunts like selling of Trayvon Targets, one wonders if a ‘fair’ trial is even possible at this point for Zimmerman.

Given what you know about the facts of the case, do you think Zimmerman will be found guilty of second-degree murder?

Do you believe Zimmerman acted lawfully when he shot and killed Trayvon?

Do you consider Trayvon to be a ‘thug’?

What are your thoughts about these targets?