Department of Homeland Security Stockpiling Ammo and Mine Resistant Vehicles?

Is the Department of Homeland Security stockpiling ammo and Mine Resistant Ambush Protected (MRAPs) vehicles?  The answer, well, ‘yes’ to the former and ‘no’ to the latter.

Blogger ‘Thirdpower’ over at Days of our Trailers has done much of the legwork on this (you can read his take here), but I’ll recap the findings below.

So, in March Guns.com reported that ATK, a supplier of aerospace and defense products, announced that it had been awarded an “Indefinite Delivery/Indefinite Quantity (IDIQ) agreement from the Department of Homeland Security, U.S. Immigration and Customs Enforcement (DHS, ICE) for .40 caliber ammunition.”

The agreement has a floor of 12 months, includes four optional years, and will have a maximum volume of 450 million rounds, according to the press release.

“We are proud to extend our track record as the prime supplier of .40 caliber duty ammunition for DHS, ICE,” said Ron Johnson, President of ATK’s Security and Sporting group. “The HST is a proven design that will continue to serve those who keep our borders safe.”

HST bullets are designed for law enforcement and ATK has said they offer “optimum penetration for terminal performance.”  This, of course, refers to the bullet’s hollow-point tip that passes through a variety of barriers and expands for a bigger impact, which helps limit collateral damage and over-penetration.

As mentioned in the video, there’s also a report that the DHS has an open bid for rifle ammo.  In particular, the department is looking to purchase 175 million rounds of .223 ammo.  This solicitation is posted on the federal business opportunities network website. 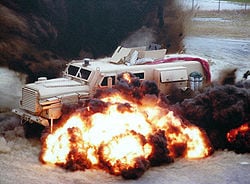 Blogger ‘Badux’ from Snarky Penguin blog sifted through the DHS’s info at the Federal Procurement Data System on April 3 (the latest date for which info was available) and found “nada” as it related to orders for MRAPs.

“So anyhow: On a scale of zero to 100, I put the likelihood of DHS buying thousands of MRAP’s at somewhere between zero to 1,” Badux wrote.

“The reason why I rate it above zero is that things on the Mexican border are not looking good right now — and in case you didn’t know, the Border Patrol is under the Department of Homeland Security now, and has been under fire multiple times from the Mexican drug gangs…” he continued.

In any event, even if the DHS is not acquiring thousands of MRAPs, the fact that it’s ordering ammo in such bulk is a bit perplexing.  The obvious question here is: why?  Why does the Department of Homeland Security need millions of rounds of ammo (in particular, rifle ammo)?