General Dynamics Armament and Technical Products is working on a new generation of super-long range machine gun that is still man-portable. They achieved this by upping the caliber from 7.62x51mm NATO, what the overwhelming majority of general purpose machine guns are chambered in, to the new and hard-hitting .338 Norma Magnum.

What makes .338NM effective is its extremely long, ballistically-efficient bullet shape.  At the muzzle it is somewhat more powerful than 7.62 NATO, but even past a couple hundred yards the cartridge shows its real strength.  From a 24-inch barrel, the 7.62mm bullet should make 2,500 foot-pounds of force, and compared to the .338 Norma Magnum’s 4,000, you can already imagine how things shake out. Even more impressive is how .338 performs at 1000 yards, which is what most consider the last bit of effective range out of 7.62 NATO.  The .338NM will still be traveling at about 2,000 feet per second, while the 7.62 will have dropped to about 1,000.  At 1100 yards the .338 Norma Magnum is still considered to be effective against Level III body armor and light armored vehicles, it has an effective range of 1,800 yards and a total range of over three miles.

Essentially because of the improved .338 ballistics, the new General Dynamics Lightweight Medium Machine Gun (LWMMG) up close trounces the M240 (which it bases its design on) and can still be effective at sniping ranges.  It sits right between 7.62 NATO and .50 BMG.

“The LWMMG is an affordable weapon that closes a current operational gap, providing .50 caliber-like firepower in range and effect at the same weight and size of currently fielded 7.62mm machine guns,”said Steve Elgin, vice president and general manager of 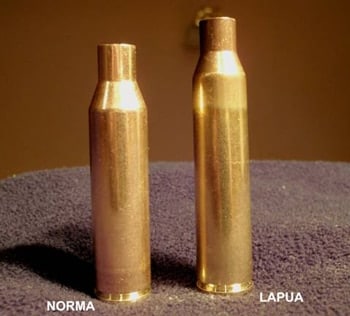 armament systems for General Dynamics Armament and Technical Products. “Weighing in at 24 pounds and featuring a fully collapsible stock, the LWMMG offers superior mobility and portability in both mounted and dismounted operations.”

And General Dynamics isn’t kidding about the lightweight part.  The LWMMG weighs 24 pounds, which is less than the standard 7.62 NATO M240B, and less than two pounds heavier than the lightweight M240L variant.  Of course, the ammunition itself will negate its slight weight advantage, as the .338NM is basically 65 per cent more bullet per bullet; it’s a considerably larger and heavier cartridge.

The LWMMG has the features most people would expect from a modern machine gun.  It has a quick-change barrel system, quad Picatinny rails for optics and accessories and even uses AR-15/M4 collapsible buttstocks.  It has a 24-inch barrel, an overall length of 49 inches and fires at 500 rounds per minute.  It is compatible with the M192 tripod.

The .338 Norma Magnum is very similar to the .338 Lapua Magnum in performance.  It has just a 6.5% reduction in case capacity and uses the same bullets, but has a less tapered case that we believe lends itself better to linking and transporting; it is better suited for a machine gun.

This is one ridiculously badass machine gun, and we hope that them that needs it gets it.  In the meanwhile we hope that General Dynamics makes a promotional video because, c’mon.  You can see the LWMMG fact sheet here (.pdf).