The shooting of Trayvon Martin has put ‘Stand Your Ground’ laws under a public microscope.

The most recent example is in Georgia where local news stations are reporting a ‘significant’ increase in the number of justifiable homicides since 2006; the same year state legislators enacted a version of the controversial self-defense law.

It should be noted that in 2011, that number dropped to five.

The Associated Press also analyzed GBI data and found that “justifiable homicides involving private citizens averaged seven per year in the three years before the so-called stand your ground law took effect. It then jumped to an average of 13 per year in the five full years since then.”

So, the question then becomes: is SYG the cause for the spike in justifiable homicides?  Also, is SYG behind the drop in the overall murder rate?

Well, to be honest, at this point neither question can be answered with any comfortable degree of certainty.  In other words, what we have in both cases is correlation, but not causation.

However, there are too many variables (as it relates to the decline in homicides) and too many limitations (as it relates to justifiable homicides, including small sample size, differences in ways CJHs are reported, etc.) to make any real conclusions about the impact of SYG laws.

In talking about a similar circumstance in Florida, where justifiable homicides are said to have ‘tripled’ post the passage of SYG, Gary Kleck a criminologist at Florida State University, told the Guardian, “The decline in crime that paralleled the enactment RTC [Right to Carry] and SYG laws cannot be considered proof of the effect of these laws. Indeed, I think RTC have no net effect on crime rates.” 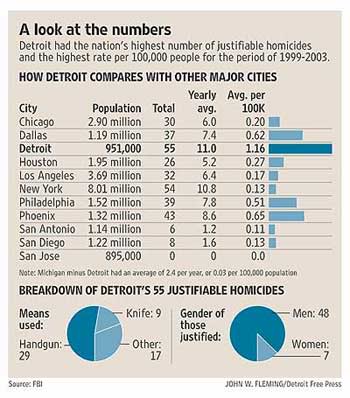 “My point, rather, is that these are the same kinds of correlations concerning CJH [Citizen Justifiable Homicide] increases and enactment of these laws that your analysis has produced [Guardian argued that there was 25% increase in CJH because of RTC and SYG laws], and are equally ambiguous in their meaning, and equally relevant to a consideration of the effects of these types of laws.”

I’ve referenced this quote before because I think it’s important to understanding how difficult it is to make assertions about the impact of these laws.  The truth is that SYG and RTC laws may have only a marginal effect on the drop in crime rates and the putative increase in CJH.

There’s another point to be made here and that’s the fact that self-defense laws have been on the books forever and SYG laws do not dramatically alter police procedure.  At the end of the day, authorities still have to determine that the homicide was, indeed, “justified.”

“I don’t sense that the statute has led to a greater change,” Tim Vaughn, the Oconee County District Attorney told the Associated Press. “You just have to apply common sense when evaluating the facts of each situation, and ask what a reasonable person would do in each particular situation. And I don’t think that it’s been a drastic change if you just apply that rationale.”

But unfortunately this common sense and rather obvious fact has not dissuaded some activists from taking action against SYG.  Currently, Georgia’s SYG law is being appealed in Federal Court.