The ‘Jump Out Boys’ is a slang term for law enforcement personnel that are often involved in sting operations.  In the Los Angeles County Sheriff’s Department, ‘The Jump Out Boys’ is the name of an unsanctioned clique of deputies belonging to an elite gang enforcement team, an ongoing internal investigation revealed.

According to the Los Angeles Times, the investigation was triggered after top brass discovered a ‘code of conduct’ document suggesting that the club embraces officer-involved shootings, portraying them in a positive light, as a ‘badge of honor.’ 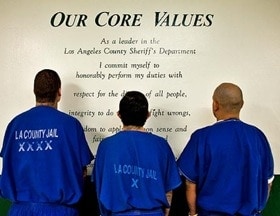 In other words, to gain esteem within the group’s ranks one has to have shot or killed a gang member.

Sources also told the LA Times that deputies don’t just join the ‘The Jump Out Boys,’ rather they have to be endorsed by an existing member.  Other than this, not much is known about the club’s behavior or attitudes.

“We’re going to be looking at this right now, but it really could be a fantasy, something that’s not true but right now we’re going to find out exactly what is and what isn’t and that will determine what our next step is,” Sheriff Lee Baca’s spokesman Steve Whitmore told the LA Times.

Whitmore did not comment on the recovered document, but when asked if the club encouraged shooting gang members, he said, “The last thing anybody wants to do in law enforcement is shoot a weapon.”

He concluded the interview by saying that Sheriff Baca understands that deputies might bond and form social groups with close co-workers but prohibits cliques when “it does not embrace the integrity to do what is right.”

In the past, the Department has had problems with rogue, deputy-conceived cliques.  In December of 2010, several deputies belonging to the ‘3,000 Boys’ were fired after they fought two fellow deputies at an employee holiday party.  Reports say that one of the deputies punched a female in the face.

The ‘3,000 Boys’ got its name from those who work on the third floor of the Men’s Central Jail.  The group reportedly used three-finger, gang-like hand signs and would ‘earn their ink’ by breaking inmates bones.

Other cliques over the years – the Grim Reapers, Little Devils, Regulators, and Vikings – have been accused of foul play, including perjury, falsifying reports, and covering up police misconduct, according to the LA Times.

Following the ‘3,000 Boys’ debacle, the ACLU recommended the closure of the Men’s Central Jail, as well as an overhaul of the L.A. County jail system.