SRM Arms has been teasing fans everywhere with promotional videos and photos of their very compact very high-capacity shotguns for some time now.

Intended for law enforcement use, competitions and tactical fun everywhere, SRM shotguns have a rotary magazine with four magazine tubes for a total capacity of 16+1.

It gets better. The SRM shotguns feed from detachable 4+4+4+4 magazines, which means you can go from empty to 16 fresh rounds of buck or slug in seconds. No manually loading the rounds one by one. It uses roller-delayed blowback, which is famous for reliable action with the heaviest of loads. Other firearms that use roller-delayed blowback include the Heckler & Koch G3 and the German MG 42. No gas operation here. 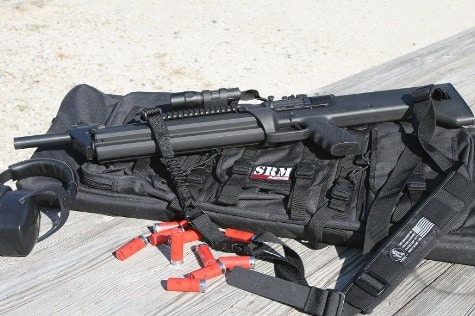 Once the shooter dumps one tube the magazine must be manually re-indexed to bring the next tube into action. When this happens the bolt automatically closes and loads the cylinder; it’s ready to go all over again.

The SRM Model 1216 is their standard shotgun and for sale where anyone can legally own extra-ridiculous capacity shotguns. It has an overall length of 34.5 inches and has an 18.5-inch barrel. It has a 16-round magazine for 2-3/4-inch shells but has a three-inch magnum chamber. With an empty magazine it weighs just 7.5 pounds.

The two other models are NFA-regulated Short-Barreled Shotguns (SBS), and have shorter barrels and 12- or eight-shot magazines, depending on the model, 1212 or 1208. All models of SRM shotguns are ambidextrous and can be swapped from right- to left-handed, including ejection, by reconfiguring its parts.

SRM, knowing that a good deal of their market will wear uniforms, has developed a new, yet-to-be-named model. This version, naturally, shoots full-auto.

We don’t care what we have to do to get a chance to send some lead downrange with one of these upcoming beauties. SRM Arms, feel free to use your imagination.