The M-1896 Swedish Mauser: How Finland stopped the Soviets cold

In 1940, the tiny army of Finland inflicted a major defeat on thousands of invading Red Army soldiers of Joseph Stalin by their superior use of ski troops winterized against temperatures in the Finnish forests of 30 below zero and a rifle—the Swedish M-1896 Mauser.

The Finns had imported a large number of the weapons from Sweden in 1939. Though the Swedish Mauser helped them stop the Russians cold, inflicting huge casualties on the communists, the Russians eventually overwhelmed the Finns by sheer numbers and forced them to surrender some territory. Later, the Finns participated with German troops in invading the Soviet Union.

“The Finns did a lot of damage to the Russians during the Russo-Finnish War,” said John Woodling, head gunsmith with Hyatt Coin & Gunshop in Charlotte, North Carolina, one country’s largest privately owned gun retailers and one of the dwindling few shops carrying Swedish made, Finn owned Mausers.

Somewhere between BMW and IKEA

Designed by Paul Mauser and produced from 1895 to 1944, approximately 750,000 of the weapons were made including the M-94 carbine, the M-96 long rifle (produced in 1896) and the M-38 short version developed by the Swedes for mechanized use and by their navy. Some of the guns were made in Germany, while others were produced in a factory in Eskilstuna, Sweden, that included the brand name Husqvarna, later to become a famous maker of motorcycles and chainsaws.

The guns were produced using the high-grade, high-tooled steel Sweden was noted for, mixed with copper, nickel and metal called vanadium, producing a weapon of both strength and corrosive-proof properties. The weapons featured a bolt-action “cock-on-closing” style feed similar to the British Lee-Enfield Rifle, were from 44 to 50 inches in length depending on the model, weighed just under nine pounds and fired five rounds from an internal box magazine.

“It was a very well-made gun,” Woodling noted. “They are popular today and many have been converted to sport for hunting rifles.”

Woodling said the 6.5 X 55 mm cartridge the gun fired was among the most balanced of its time, making it a most accurate and deadly weapon. The cartridge is noted for having a low recoil and flat trajectory. Hunters who go after deer particularly like it.  Manufacturers such as Ruger and Winchester are producing new hunting rifles that also chamber to the same round. 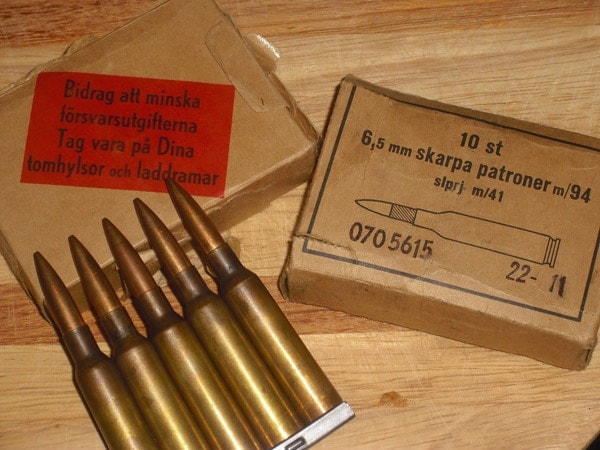 The rifle had an effective range of 500 yards or 2,000 fps and is also considered one of history’s most beautiful rifles, with its elegant look, blonde stock and oiled finish.

“They were carefully crafted,” Woodling said. “They didn’t just hammer them out.”  These guns have also found a home today in America at Vintage Military Rifle matches.

On the collector’s market

Today, the Swedish Mauser is one of the most collectable and desirable of historic rifles because large numbers are still available on the market at reasonable prices. It is also easily adapted to sport hunting purposes.  Any M-1896 Swedish Mauser used by the Finns in the Russian War or in World War II can be spotted by the letters ‘SA’ (meaning Finnish Army) surrounded by a square with rounded corners.

A collector can get a standard Swedish Mauser or carbine in good condition equipped with a military sight for about $600. A sniper version of the weapon, some dating from 1941, came equipped with a scope, and generally commands a higher price at an average $2,000.

“Most of the rifles were made in the late 1930s,” Woodling said. “They are plentiful numbers of them on the marketplace, and the prices usually range from $400 to $600.”

It wasn’t until the 1950s that Sweden fazed the guns out of its military and some of the sniper rifles were still in use up until the 1980s and an M-1894 carbine is still used at the palace by the Kings Royal Guards. 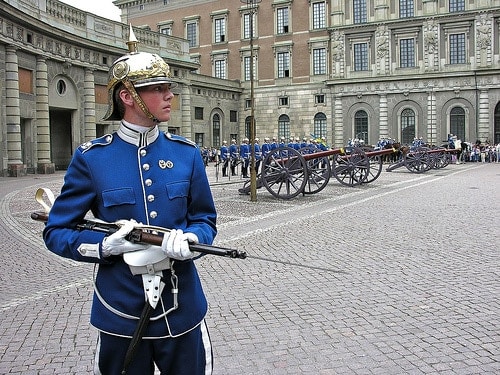 That Sweden, considered by many people as a passive, militarily neutral country, should produce such a fine weapon is somewhat ironic. However, Woodling explained that while the Swedes have historically often been neutral, they have always fiercely defended their independence.

“In Sweden, men in those days from the ages of 18 to 60 were issued rifles which they kept at home,” he said.

UPDATE: The armed forces that guarded Vatican City during WWII were known as the Swiss guard, and were not Swedish as included in the original text.