A few days ago, intrepid reporter Emily Miller of the Washington Times detailed the story of wounded war veteran Lt. Augustine Kim and his quest to have his firearms returned to him after they were confiscated by Washington D.C.’s Metropolitan Police Department.

You can read the full article here, but here’s a brief recap of the situation. Lt. Kim is a M1A1 Abrams battle tank platoon leader.  During his second tour in Afghanistan, Lt. Kim was injured in a vehicle crash.  He broke several bones on the left side of his face, including the lower orbital bone, and shattered his right arm.

He spent the next three months receiving care at Walter Reed.  When he fully convalesced, he went to go pick up his gun collection at his parents house in New Jersey.  See, knowing that he would be in theater for quite some time he gave his firearms to his mom and dad for safe keeping as opposed to leaving them in his vacant home in Charleston, SC.

While returning to South Carolina, Lt. Kim made a quick stop at Walter Reed for a check up.  Later that evening he was pulled over by police for having a suspended driver’s license.

Believing his driving record was in good standing, Lt. Kim was puzzled by the claim (turned out that it was a clerical error, wrongly accusing Lt. Kim of not paying a speeding ticket).

The police officers said they would have to bring him in, but before they did, they wanted to search his vehicle.  Lt. Kim did not have a problem with this; he knew that he had observed federal law regarding the transportation of firearms.

“I told them I had been under the impression that as long as the guns were locked in the back, with the ammunition separate, that I was allowed to transport them,” Mr. Kim told Emily Miller in an interview. “They said, ‘That may be true, however, since you stopped at Walter Reed, that make you in violation of the registration laws.”

In D.C., it is illegal to possess a firearm outside the home.

Since Lt. Kim had multiple firearms, including an AR-15 (which D.C. deems an ‘assault weapon’), he was charged with four felony counts of carrying firearms outside the home, charges that could have resulted in as much as 20 years in prison and fines up to 20,000.

He spent the night in jail.  On reflecting on his experience in the “drunk tank,” he told Ms. Miller, “I remember thinking, we treated detainees in Afghanistan better than this.”

After getting out, Lt. Kim lawyered-up.  But not just with any attorney, he hired Richard Gardiner, the same Richard Gardiner who represented Dick Heller in the landmark Supreme Court case Heller v. District of Columbia.

Gardiner went to work, negotiated with the prosecutor and got the charges down to one misdemeanor charge, which was summarily dismissed in May 2011 after Kim’s 9-month probationary period expired. 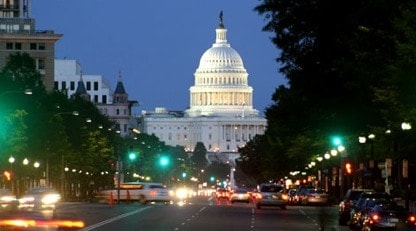 It’s now a year later and Lt. Kim still does not have his firearms back.  Despite bending over backwards, writing letters, doing everything in his power to comply with the MPD’s bureaucratic process, not one of his firearms have been returned (he estimates his collection is worth approx. $10,000).

“This is legalized theft,” Mr. Gardiner told the Washington Times. “The charges were dropped, and they don’t give you your property back? The Constitution requires that if the government takes your property, it has to do something to keep it. They can’t sit around twiddling their thumbs.”

Lt. Kim is now preparing for his third tour of duty.  In the coming months, he will be deployed to Kosovo.

It’s been said before, but one can tell a lot about a government by the way it treats its war veterans.

Guns.com wishes the best for Lt. Kim.  We hope he gets his guns back, but more importantly, that he returns safely from his third tour of duty.

Guns.com would also like to thank Kate for bringing this story to our attention.