Federal Ammunition was awarded the NRA publication Shooting Illustrated’s Golden Bullseye award for their premium self-defense Guard Dog expanding full metal jacket ammunition not too long ago. The award is for the Ammunition Product of the Year. And at the very least, this is interesting ammo.

The design is a combination of both hollowpoint and full-metal jacket features. Guard Dog ammunition has a polymer-filled cavity inside the front of the bullet that is constructed similarly to hollowpoints and scored inside to split apart.  But the petals are all connected together by a thin jacket over the bullet’s tip. 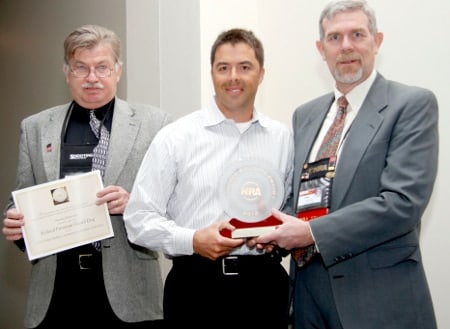 Instead of blooming like flower petals Guard Dog ammo flattens and pancakes, the polymer acting as a mechanical force that pushes the walls of the cavity into an even disk for very predictable expansion. While the overall diameter of the expanded bullet is going to be slightly less than the maximum diameter of a traditional hollowpoint, the polymer also fills the gaps between the petals, greatly increasing the surface area of the flattened bullet point. Behind the hollow cavity is a standard lead-filled bullet base.

Another interesting thing is that these are not +P or even particularly high-energy bullets. Because of the bullets more reliable expansion, Federal did not soup up these cartridges to extremely high pressures (which could be a con from a different perspective) which makes them extremely fast shooters, insuring ease of follow-up.

Also, because they’re fully-jacketed, they are much less likely to encounter feeding problems, particularly with older designs that center around lead, ball, or soft-point ammo.

But perhaps the most important thing about Federal’s Guard Dog ammunition is that by being a fully-jacketed bullet, it is available for sale in jurisdictions where hollowpoints are restricted or banned. Almost every school of thought regarding self-defense ammunition is that the bullets need to be expanding. But even so, in many places hollowpoints are prohibited, which is why these Guard Dog cartridges are so important. They can go where hollowpoints can’t, and are available in the following configurations:

However, as new products go, it will be a while before they’re proven rounds, and even longer before they’re widely adopted. Have you had any experience with Federal’s Guard Dog ammo? What are your thoughts?