This week, Sanford city officials released material that shines new light on the controversial Trayvon Martin case, including photos of George Zimmerman’s face and head wounds taken in the immediate aftermath of the altercation, autopsy results that found traces of THC in Martin’s bloodstream and a police report that alleged the killing of the Florida teen was “ultimately avoidable.”

Since the beginning, one of the key questions in this case has been: Did Trayvon Martin attack George Zimmerman?

And, as a follow up, if he did attack him, where is the proof? Zimmerman’s story has not changed.  He has maintained all along that he’d been “assaulted (by Martin) and his head was struck on the pavement.”  This information was recorded in an initial police report that leaked to the press at the outset of the investigation.

However, there was little proof — as far as photos — to corroborate that claim (one will recall that blurry video that surfaced a few weeks after the story went viral, it was difficult to tell from that video whether Zimmerman had been injured or not).

All that changed on Thursday when the Sanford Fire Department released a report which stated that Zimmerman had “abrasions to his forehead,” “bleeding/tenderness to his nose,” and a “small laceration to the back of his head” when emergency personnel arrived at the scene at 7:27 p.m., six minutes after they were first called.

To go along with that report, photos of Zimmerman’s face were included.  It’s now clear that the former neighborhood watch volunteer was struck multiple times in the face and head.

When Zimmerman called 911 just before the shooting, he had told the dispatcher that Trayvon looked like he was “up to no good or he’s on drugs or something.” 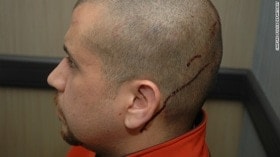 As it turns out, according to the autopsy results, Martin’s blood contained trace levels of THC, the psychoactive ingredient in marijuana.

As CNN reported, “Toxicology tests found elements of the drug in the teenager’s chest blood — 1.5 nanograms per milliliter of one type (THC), as well as 7.3 nanograms of another type (THC-COOH) — according to the medical examiner’s report. There also was a presumed positive test of cannabinoids in Martin’s urine, according to the medical examiner’s report. It was not immediately clear how significant these amounts were.”

However, what’s unclear is how much of an effect these substances had on the teen’s behavior.   One toxicologist, Dr. Michael Policastro, told CNN that one should not read too much into the blood THC levels, adding that one cannot make a direct correlation between those findings and a level of intoxication.

He also noted “levels of THC, which can linger in a person’s system for days, can spike after death in certain areas of the body because of redistribution.”

Was Trayvon ‘high’ when he fought with Zimmerman?

At this point, it doesn’t look as if those levels are significant enough to have caused abnormal or aggressive behavior.  But one could argue that it may be another blow to the prosecution’s case against Zimmerman.

Christopher Serino, a Sanford Police Department investigator, called for Zimmerman’s arrest in the report, citing that Zimmerman should have remained in his vehicle and waited for the authorities to arrive. 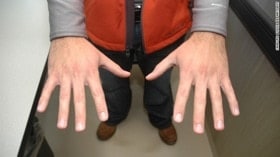 Moreover, Serino argued that Zimmerman should have alerted Trayvon that he was a concerned citizen instead of confronting the teen in the matter in which he did.

“The encounter between George Zimmerman and Trayvon Martin was ultimately avoidable by Zimmerman, if Zimmerman had remained in his vehicle and awaited the arrival of law enforcement, or conversely if he had identified himself to Martin as a concerned citizen and initiated dialog (sic) in an effort to dispel each party’s concern” the request stated.

“There is no indication that Trayvon Martin was involved in any criminal activity,” it concluded.

How much impact this report will have in the courtroom remains to be seen.  However, one can bet that the prosecution will construct an argument along similar lines, i.e. Zimmerman should have followed the advice of the dispatcher, stayed in his car and not pursued Martin.

Overall, there are still some issues that need clarification.  For example, who was the one screaming for his life on the 911-tape?

Both parties are divided on this issue.

“That is absolutely positively George Zimmerman,” Robert Zimmerman (George’s father) said, according to The Associated Press. “He was not just yelling, he sounded like he was screaming for his life.”

Meanwhile, Sybrina Martin, Trayvon’s Mothers, said she believes that is her son’s voice on that 911 tape.

The tape was sent to the FBI for analysis, but due to the poor sound quality investigators were not able to determine who was screaming.

In then end, this is a complicated case, one that needs to be tried in front of a fair and impartial jury.  Let’s hope there’s one out there.

No trial date has been set as of yet.