Veterans to Return Medals in Protest; Share Thoughts on Election

War veterans belonging to the ‘Iraq Veterans Against the War’ plan to lead an anti-war march this Sunday through the streets of downtown Chicago to the convention center where NATO is holding its summits.  As a sign of protest, these heroes will return their medals to the NATO leaders who aided in sending them off to war.

Iraq war veteran Steven Acheson will be one of the veterans participating in the demonstration.   Acheson served five years in the Army and spent more than a year of that time in Iraq.  He still suffers from PTSD and hopes that this controversial but symbolic gesture becomes a cathartic experience.

“I feel like this is a really good way for me to kind of, not clear my conscience, but just make a step in the direction of healing and kind of reconciling with the Afghan people and the Iraq people,” Acheson, a 27-year-old college student from Wisconsin, told NBC, “… and let them know that we’re standing by their side and we’re not standing with NATO anymore. We don’t agree with the policies that are driving these wars.”

Members of the ‘Iraq Veterans Against the War,’ which includes veterans from all post-9/11 conflict zones, will be joined by Vietnam veterans and other anti-war organizers during the march.  The tentative plan is to carry an American flag, lower it, replace it with a white one, then pin the medals to the American flag and present it to NATO leaders. 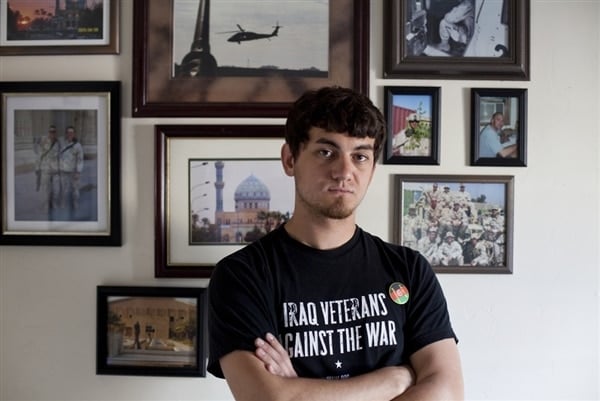 If that plan falters they might just resort to tossing the medals in the direction of the convention center, similar to what 900 Vietnam veterans did in 1971, in Washington D.C., at a protest known as  “Operation Dewey Canyon III.”

Acheson admitted that he would not be forfeiting all his medals, only his “Global War on Terrorism Service Medal” and the “Iraq Campaign Medal”; he is holding on to the other medals he was awarded.  He still feels proud about serving his country, but he has become disillusioned with the politics of war.

“I’m tired of seeing … fellow vets being redeployed with traumatic brain injuries and post-traumatic stress disorder, and I’m tired of seeing soldiers being deployed in general to an illegal war,” he told NBC. “I just feel like we’ve spent enough money and enough lives over there … it’s time to come home.”

While polls show that many veterans agree with Acheson’s sentiments about the war – according to a Reuters/Ipsos poll only 32 percent think the war in Iraq ended successfully.  And far more of them would pull out of Afghanistan than continue military operations there – many balk at the idea of giving back service medals.

“They’re as much of a disgrace as the veterans back in the Vietnam days that did the same thing,” retired Army 1st Sgt. Troy Steward, of New York, who served 22 years, told NBC. “If these veterans aren’t proud of the service that they did … then they should never have accepted them (medals) in the first place.”

Steward who is an Afghanistan veteran added that the action was “disgraceful and disrespectful” to others who had served. While the veterans were welcome to express their opinions, he said, there were a lot of “better ways to do it than essentially shaming your military service and your brethren.”

One of those “better ways” to make one’s voice heard is at the voting booth, some veterans argue.

Mack McDowell, a 30-year Army veteran, has his eye on the 2012 presidential election.  McDowell supported Ron Paul “because of his unchanging stand against overseas involvement.”  However, now that Paul has suspended his campaign, McDowell is looking for the candidate who is least likely to wage “knee-jerk reaction wars.”

Still reeling from the bitter and hyper-competitive Republican primaries, McDowell has not ruled out voting for Obama.  “If no one else can get their act together, I’ll vote for that Democrat,” he told Reuters. “My concern is who will do right for the soldier.”

Overall though, when asked about how Obama has handled his job, only 27 percent of veterans approved.  A total of 37 percent disapproved, while the rest were undecided.  And when questioned about whether the country is headed in the right direction, only 24 percent said it was, 60 percent said it was off on the wrong track.

At the end of the day, whether it’s at an anti-war protest, in an opinion poll, or at the voting booth, when veterans speak, we need to listen.  We need to make sure their voices are heard.