Originally introduced in 1980, the Distinguished Combat Magnum came about at the apogee of the service revolver.  It was designed as a daily carry sidearm, putting handling and ease-of-use above size or weight concerns.  At 46 ounces with a six-inch barrel that should be obvious (40 ounces for the four-inch model). 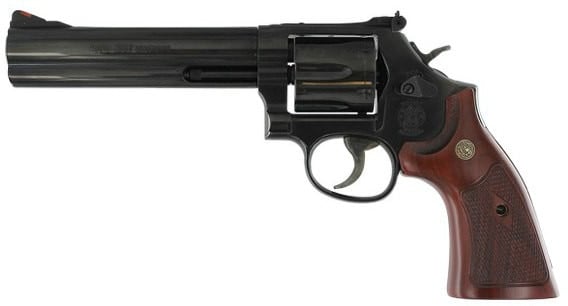 All that weight and the full underlug without a doubt attributes to this 586’s ability to put the hottest .357 Magnum rounds downrange.  The new Distinguished Combat Magnum will be available in two models, a six-inch version and a smaller four-inch version.  Both sport a deep blue finish and full-size wood checkered grips, and both have square-butt frames.

The Distinguished Combat Magnum series of guns is most remembered for the factory-tuned single-action trigger that we do expect S&W to repeat.  Although these revolvers, like all current Smith & Wesson revolvers, features the key lock, we expect the trigger to start life polished, smooth and crisp. 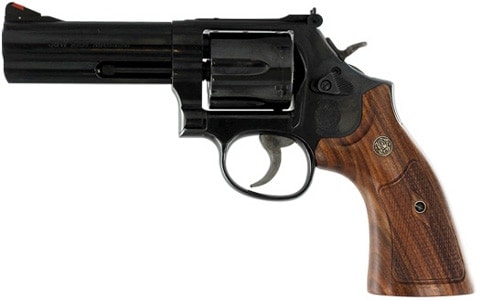 Other features are a full standard backstrap which will help tame recoil as well as a front red ramp sight and rear adjustable white outline sight.  The Distinguished Combat Magnums are all six-shot .357s which, of course, can shoot .38 Special and .38+P.

The 586 Distinguished Combat Magnum is a welcome addition to Smith & Wesson’s Classic collection of revolvers.  The MSRP should be about $800 and it’s currently shipping to stores near you.  Expect real-world prices to start around $700.