The Venezuelan National Guard has selected, as some point, the Beretta Cx4 Storm carbine for their weapon of choice.

You may be wondering why an organization as major as the National Guard wouldn’t pick a weapon with a little more bite to it, like an M16 or some other AR- or AK-style rifles, but their decision to go with the Cx4 Storm actually makes quite a bit of sense.

The Venezuelan Guard isn’t a full-blown military organization like you’d expect. It’s more of a pseudo-police force than anything else, so these guys running around with heavy assault rifles would be complete overkill. Plus, the Beretta Cx4 is marketed specifically for self defense and law enforcement, so it should be exactly what the Venezuelan Guard is looking for.

The Cx4 Storm is available in three different chamberings — all handgun calibers — such as 9mm, .40 S&W and .45 ACP. The offerings along with its size reminds one of the HK MP5 or some other Personal Defense Weapon. It’s short and is designed for short ranges. The sights are meant for, at most, 100 meters. 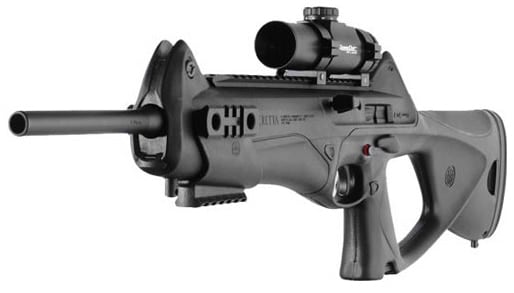 Guns.com finds it a bit endearing that these two found each other. A military organization that’s kinda-sorta like a police force hooks up with a rifle that’s kinda-sorta like a pistol. Normally something that serves a hybrid role has a hard time finding equipment to suit its needs, but this best-of-both-world carbine can provide the versatility that police forces need, but the tactical reliability required for military groups. Sounds like a match made in heaven.