Army and Marines Working on Lightweight Ammo, Machine Gun to Shoot it

The Army and the Marine Corps are working on a new lightweight machine gun, which could possibly replace the M249 Squad Automatic Weapon (SAW), that would shoot a new type of caseless and case-telescoped ammo. Together the new technology would cut the weight of troops’ gear by as much as 25 pounds, according to the Marine Corps Times.

You don’t have to be a rocket scientists to see how incredibly useful this type of gear would be, we just need to get everybody behind the project in order to really get the research and development done.

George Solhan of the Office of Naval Research predicts that the full support of Capital Hill would shorten the time it would require to get the ammo and the guns out into the field to a mere two years. Getting politicians to agree is the trickiest part, but even the Army and the Marine Corps disagree about how to build this lightweight ammo.

The Army is content with case-telescoped rounds, which keeps the bullet and the propellant encased in a polymer cylinder. These weigh less than conventional rounds and are much easier to make than caseless bullets, but the Marines think that’s not good enough. They want a bullet that is completely encased in the propellant with the use of binding agents. In theory, whenever a Marine fires one of these bullets the propellant will completely burn up, leaving nothing to be ejected. This type of technology would make the ammo lighter, less likely to fail and, theoretically be, just as effective on the field. 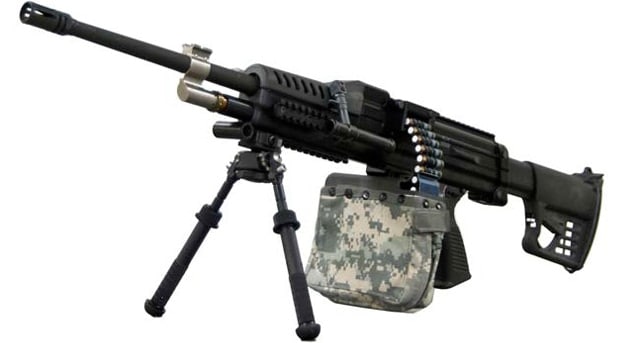 The cost of this project for both the Army and Marines, Solhan predicts would be equal to the price of “a couple of current-generation jet fighters,” he said.

The great thing about this initiative is that the technology will inevitably trickle down to the public. Once the Marines figure out the mystery of caseless bullets, it won’t be long before we similar lightweight ammo hit the shelves.