When Sean Caranna is not fulfilling his official duties as the Executive Director of Florida Carry, Inc., a non-profit, non-partisan, grassroots organization dedicated to advancing Second Amendment rights for all Floridians, he is showcasing his journalistic prowess on his website: All Nine Yards.

According to Caranna findings, MAIG is actively embedding its operatives (or ‘coordinators’) into city governments while getting the cities to pay through grants for a portion of the coordinators’ salaries.

Here is how Caranna came to this conclusion:

Back in March, while researching the repeal of some anti-gun ordinances, I stumbled across an Orlando City Council agenda item that grabbed my attention. It was, on its surface, just a mundane action item for the annual contract renewal of a city employee. But this city employee’s job title was, well, unique…

The agenda included a budgetary breakdown for how a $75,000 grant from the “United Against Illegal Guns Support Fund” was to be spent.

Also attached was the Fiscal Impact statement.  It showed that this employee’s salary and benefits were expected to cost the city $84,000 for the year.  It allocated $24,000 from the city’s “General Fund” to cover the grant’s shortfall.

In other words, Orlando taxpayers have to cover that $24,000 gap in funding.  Whether they like it or not, it seems as though their hard-earned money is going to fund the salary of an MAIG coordinator whose sole job is to enact tougher gun laws in the Sunshine State. 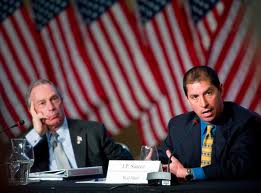 Caranna uncovered other instances where it looks like MAIG implanted operatives into these quasi-government roles.  One includes a Wisconsin Police Officer, who took a one-year sabbatical from fighting crime so that he could serve as the MAIG Regional Coordinator to Milwaukee Mayor Tom Barrett.  In this case, it appears that his entire salary was financed on the public dime.

There’s another salient point that Caranna made in his article, which is that even if MAIG paid for the entire salary of these government liaisons there is still collusion going on, a subversion of public interest at the hand of a private (gun control) agenda.

And if one thinks about it, that’s really the brilliance of the MAIG strategy.  Instead of trying to win the hearts and minds of the people – which, let’s face it, is an uphill battle for gun control advocates as the majority of the public supports gun rights – MAIG targets politicians and government bureaucrats.  Hence, the obvious name ‘Mayors’ against illegal guns and not ‘People’ against illegal guns.

MAIG knows that if it can intercede at the governmental level by co-opting Mayors or embedding ‘coordinators,’ it can more readily curb public policy to accord with its agenda.  Now, as for using taxpayer funds to get the job done, well, that’s just the cherry on top.