Check Out this Revolutionary U-Shaped Magazine

A designer has come up with plans for a curved magazine capable of holding twice as many bullets as a conventional magazine. Forgive us if we sound a bit giddy, but a design like this could completely revolutionize how gun owners handle ammo.

Shooting bullets at an extremely high rate isn’t difficult — mankind has had that level of technology mastered for decades. The tricky thing nowadays is designing an ammunition system that can keep up with such absurd rates of fire. Unless you want to have enormous magazines or use an ammunition belt, frequent reloading is the only viable option for automatic rifles.

This “Ribbon Spring” design, created by Australian Richard Urwin and made public through The Firearm Blog, should double the amount of rounds in each magazine without taking up much space. The ammunition would travel down one side of the U-shaped magazine, turn 180 degrees, and then travel back upward into the gun like in a conventional magazine. More bullets, fewer reloads, and not a lot of extra weight or bulk — what’s not to love? 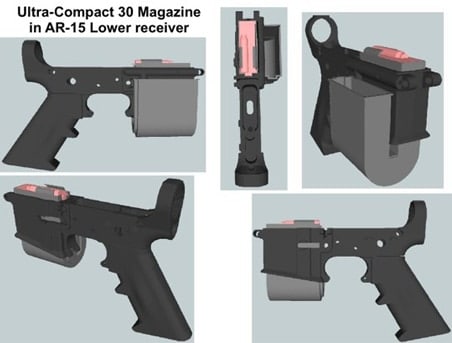 The only wild card about the magazine is the spring, which is simultaneously the most important and the most troubling feature. It is difficult to create a spring that will reliably make a 180-degree turn, but Urwin thinks he’s solved the mystery. His CAD designs don’t include the spring system because he’s still working on a patent, but Guns.com is hoping that that Urwin can get his idea to a manufacturer sometime soon.

Guns.com would have to get our hands on one of these U-magazines before we could be certain, but this looks like one of the most convenient high-quantity magazine designs ever imagined.