You don’t have to go to the Middle East, or even Arizona, to get a picture of how wearing body armor or just a simple ballistic vest in the wrong kind of weather can get exceptionally arduous. Empa of Switzerland aims to make using ballistic protection just a little more comfortable.

The idea isn’t entirely new, athletes and even office workers all over the world have been working cooling systems into their apparel for many years, but combining some kind of heat management device into a body armor obviously has some other concerns to go along with the design. 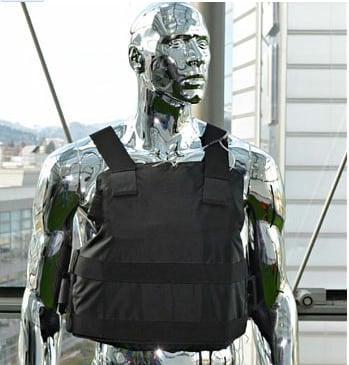 Empa, working with Unico Swisstex has prototyped a Kevlar vest with a cooling system in it. Calling it air conditioning is misleading; the vest uses a series of tubes that channel water around your body’s core which is chilled by evaporative cooling. The Empa armor also has an air-cooled membrane that wicks sweat away from your body.

The technological difficulties were greater than simply finding fans and pumps that would be compatible with a small and flexible package. Battery systems and a water reservoir that could be refilled on the fly had to be incorporated in the body armor.

And of course, a Kevlar vest that’s been plumbed and fitted with an air pillow can’t be stitched together with needle and thread. Empa and Unico Swisstex had to develop a laser-diode welding system to assemble the vests without compromising the vests many purposed layers.

Details like price and technical specifications have yet to be announced; this is probably due to the fact that they are just now going into production. However they are only targeting the police markets currently. It’s very likely that in the future technology like this will make its way into soldier systems designed to deal with more powerful small arms and shrapnel but for now its for the men and women in blue.

Initial runs of the Empa vest will have enough power and water to keep a person cool, depending on things like ambient humidity and temperatures, for three to four hours in the heat.