Last week, in Passaic County, New Jersey, the Sheriff’s department held a gun buyback event.  According to those running the program, the Rev. Allan Boyer of Bethel AME Church and Passaic County Sheriff Richard H. Berdnik, it was a success.

The Sheriff’s office shelled out more than $20,000 “buying back” (an odd term, considering that the governor never owned them) 282 guns from Paterson residents, in what will hopefully lead to fewer guns in the wrong hands.

“These weapons could have caused significant loss of life and, of course, help perpetuate the cycle of gun violence plaguing our streets,” Sheriff Berdnik said at a press conference before a table of firearms.

However, as noted by a local reporter from North Jersey.com, most of the guns recovered as part of the buyback did not resemble the illegal guns often carried by gang members and thugs.  There were, “hunting rifles, B-B guns and decades-old pistols decades – a Lugar 9mm from World War II, a pistol modeled after a flintlock of colonial times,” according to website. 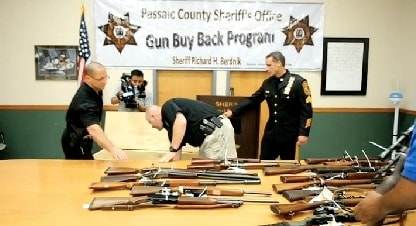 As for the crowd that showed up for the event, Rev. Boyer noticed a wide array of people from “a lot of grandparents” to younger men from the neighborhood.

“If this doesn’t reduce crime in the streets, it’s going to at least reduce accidental shootings in the home,” Rev. Boyer told reporters.

Berdnik added, “Any gun that shoots is a hazard on the streets.”

As with most buybacks, the recovered guns will be destroyed and no ballistic testing will be conducted to establish whether they were used in a crime.

“We take this as a Don’t Ask, Don’t Tell,” Berdnik said. “We do that to establish credibility.”

In reading about this buyback, as well as others, it makes one wonder whether buybacks are a good or bad idea?   Or better said, are they effective? 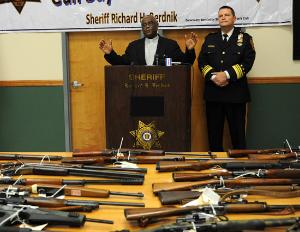 In theory, I think we can all agree that gun buyback programs are a great idea because they take crime guns off the street, helping to make communities safer.

In reality though, gun buyback programs don’t really make communities safer.  Drug dealers and thugs – the people buybacks really target – are not going to quit the hustle and disarm for a couple hundred bucks.

This fact is evident by the turn out at this Paterson event.  One could tell by the types of guns recovered (WWII era firearms), the people who showed up (grandparents), and the back peddling by event organizers (“If this doesn’t reduce crime in the streets, it’s going to at least reduce accidental shootings in the home”) that this buyback failed to reach the people it was designed for.

Okay, so does that mean we should throw the baby out with the bathwater?  Do we completely get rid of buyback programs?

No, I don’t think so.  I think buying back firearms from people who no longer want them (for whatever reason) is a good thing (negligent or apathetic people in possession of firearms put a community at risk), especially when officials use confiscated drug money instead of taxpayer dollars to pay for the firearms.

However, I think we must be realistic about the impact such programs have on crime-ridden neighborhoods.  That is, as much as we would like to believe a buyback would help curb drug and gang violence, the reality is it probably will not.