The launch of the SIG P290 9mm single-stack sub-compact pistol last year was not an easy one. Initially well-received, P290s “in the wild” suffered from light strikes and short-stroking issues that induced very serious malfunctions. Many of the guns ran great, but one bad apple…

The light striking troubles were SIG’s primary problem. Despite having a moderately stout trigger pull at around nine pounds, the P290 uses a pre-cocked hammer, similar to Kel-Tec and Ruger handguns and if the gun fails to cycle, the slide must be manually cycled before the trigger can be pulled for effect. The light strikes were being caused by something internal.

SIG re-worked the P290 and the hammer issues died off, but that only left people with short-stroking problems. If the trigger is pulled before it fully resets, then again, the slide requires manual cycling to re-pre-cock the hammer. Unlike true double-action-only (DAO) guns, you could not simply let the trigger reset to be able to pull the trigger for the gun to fire. 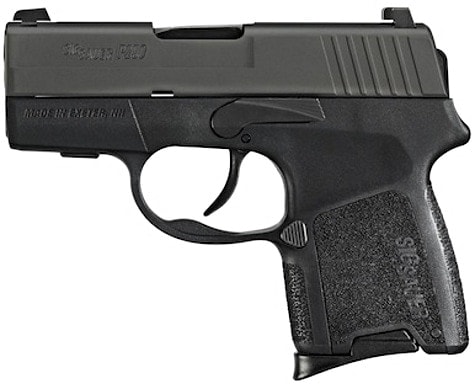 “The most common thing we heard about the P290 was a request for restrike capability,” said Jeff Creamer, Director of Product Management. “With this second-generation pistol, we delivered on these requests as well as other feedback.”

A new model of P290 was called for, and SIG is delivering. Called the P290 RS, this new model is a true DAO pistol with a trigger that operates in a way more familiar to many shooters. Short-stroking the RS isn’t the issue it is with the standard P290, and should you have a dead primer or misfire then you can pull the trigger again to attempt to restrike (RS) the cartridge.

“Microcompact 9mm pistols can be a challenge to shoot,” Creamer said. “But from the beginning, the P290 offered a greater degree of shootability. With the next generation P290 RS, we’ve made an already user-friendly handgun even better.” 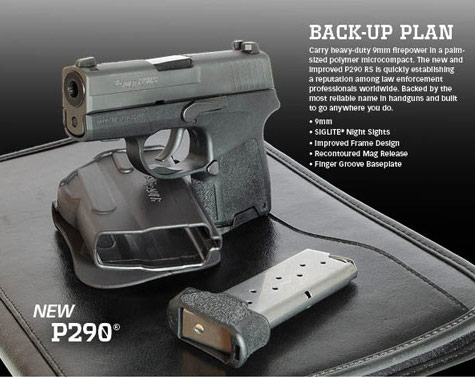 The P290 RS has a few other ergonomic differences as well, including a contoured low-profile magazine and slide releases and an enlarged and reshaped beavertail for really high-gripping or large-handed shooters. The dimensions remain largely unchanged, and although SIG has not announced the specifications officially, they’re essentially interchangeable with the original P290. The RS has a slightly extended magazine baseplate that extends the grip a small amount more for those that had issues with the very compact two-finger grip.

The P290 RS is already being listed at around $600, give or take $50 and it should be available very soon if not right now. This includes night sights and two magazines, one flush-fit for 6+1 rounds of 9mm and another with a grip sleeve with a capacity of 8. The RS keeps the interchangeable polymer grip panels as well as the proprietary dust cover mount for laser sights.

While you get a lot of gun in a small package with the P290 RS, it’s a second generation of a gun that’s just barely a year old, a gun that has already seen significant re-working. We will have to spend some time with one before we come to any strong conclusions about it. That being said the new RS is exactly what many people have been asking SIG to make from the get-go. Who here is already excited?