Conservative-Daily.com is apparently sending out ‘Daily Sanity’ email alerts warning gun owners about Sen. Barbara Boxer’s (D-CA) S.176, ‘Common Sense Concealed Firearms Permit Act of 2011,’ a bill that would, according to the email, strip away “shall-issue provisions in every state.”

The email goes on to give a break down of all the provisions listed within the bill:

Here is EXACTLY what S. 176, if gun-grabbing California Senator Barbara Boxer gets her way, would do to the status of concealed carry in America:

•    Outlaw Vermont-style carry  by requiring a permit system in every state that allows concealed carry of any kind (Vermont’s freedoms do not require a permit to carry);
•    Establish a national minimum age of 21 for permits;
•    Require that law enforcement be involved in the process (many states simply use NICS checks and county clerks);
•    Insist an applicant prove (to law enforcement satisfaction) that he or she has a “good cause” for requesting a carry permit—returning us to the bad old days when self-defense wasn’t good enough; and,
•    Force applicants to get that same law enforcement officer to certify they are “worthy of the public trust to carry a concealed firearm in public.”

Now, I looked up the bill (which you can see here) and it turns out that the S.176 does indeed call for those aforementioned changes to concealed carry issuance, on a national level.

But, there’s a problem with the Conservative-Daily email alert.  That is, (a) it makes a rather obvious grab for your wallet and (b) S.176 is a dormant bill with zero co-sponsors.

The alert goes on to say that the email recipient can fight back against this draconian piece of legislation by clicking on a link – ‘Click here to demand Congress send S.176 to an early and deserved grave! – that leads to the following page:

Clearly, they want you to spend money on ‘Blast Faxes’ (notices that denounce the bill) to lawmakers.  How much of your money goes to Conservative-Daily.com and how much is spent on ‘Blast Faxes’ is not clear.

The other point, which David Codrea of Examiner.com, looked into is the relative dormancy of S.176.  Codrea wrote in his article, “So it’s curious that checking out S. 176 on the Library of Congress THOMAS federal legislation information resource shows Boxer introduced it in January of 2011, it was sent to the Senate Judiciary Committee, no further action has been taken since then, and, importantly, there are no co-sponsors.”

“In other words, saying this kindly, there would appear to be other more pressing priorities at present,” Codrea stated.

Put another way, Conservative-Daily.com wants you to spend money to fight a bill that doesn’t have any momentum in Congress.

There’s also the question of who is behind Conservative-Daily.com? 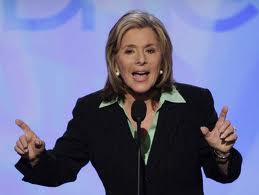 This is a question without a clear answer.  There’re no profiles of the individuals behind the website and the ‘About Us’ tab consists of a rather unsurprising statement “We are conservative.”

Like with everything else that ends up in your email Inbox, you have to vet it and consider the feasibility of the claim(s) it makes.

Quite frankly, if S.176 were an imminent threat then the NRA, the NRA-ILA, the NSSF, the Second Amendment Foundation, and a bunch of other reputable pro-gun organizations would be all over it.

Moreover, if it did have traction amongst lawmakers, Guns.com (and every other pro-gun publication) would have covered it ad nauseum, as well.  But again, it appears to be nothing more than a Barbra Boxer pipe dream.  Nevertheless, for good measure, we’ll continue to keep an eye on S.176.

As for Conservative-Daily.com, I’ve never heard of it before writing this article, have you?

If so, do you consider it to be a reputable source for information?