Journalist Emily Miller of the Washington Times is at it again, with another jaw-dropping story that highlights how war veterans have been abused and mistreated as a result of Washington D.C.’s draconian gun laws.

Last week it was Lt. Augustine Kim, who was arrested for driving through D.C. with his firearms safely secured in his trunk and this week it’s Army 1st Sergeant Matt Corrigan, a D.C. resident, who was woken up in the middle of the night, grabbed from his home – which was subsequently raided, police seizing his firearms – arrested, and detained for approximately two weeks all because his firearms were not ‘properly’ registered.

You can read the first installment of Ms. Miller’s story here, but below is a brief recap of Sgt. Corrigan’s situation.

In 2005, Sgt. Corrigan volunteered to go to Iraq.  As an Army reservist he had options, and he could have potentially opted for a different assignment.  But the Army badly needed help training Iraqi soldiers and he figured this deployment would be good for his military career.

While there, he spent much of his time in Fallujah, training Iraqi troops and assisting the Marines who had recently secured the battle-torn city.  Part of his job included clearing IEDs from roads and urban areas, a job that is both inherently dangerous and super stressful. 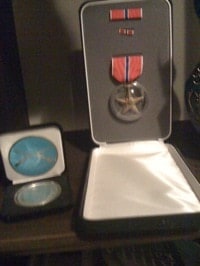 He told Ms. Miller that even today he remains hyper-vigilant, often scanning the horizon for “IED triggerman.”  He spent a total of one year in the ‘sandbox’ and then returned home. For his service, he was awarded the bronze star.

Re-adjusting to his day job as a statistician for the Bureau of Labor Statistics proved to be difficult.  “In 20 days, I went from being shot at to sitting in a cube wearing a suit,” he told Ms. Miller. “Your body is in America. Your head is in Iraq.”

In Feb. 2010, Sgt. Corrigan was having trouble sleeping.

“I kept seeing my own dead body with my friend and family standing over me, looking disappointed. Sometimes I died in Iraq, sometimes here,” he told Ms. Miller. “I didn’t sleep for four or five nights in a row.”

He was taking prescription medication to help him sleep, but he didn’t know why he was having these nightmares so he called a VA counseling center that night, which turned out to be a suicide hotline.

The woman answering the phone obviously asked him if he owned firearms.  He told her the truth; not thinking it would be a big deal.  From that point forward, the woman did not really listen to a word he had to say.

“I told her, ‘I don’t have the gun out.’ And she kept saying, ‘Put down the gun.’ She talked like I had the gun in one hand and my cell phone in the other” Sgt. Corrigan recalled.

“She insisted I repeat the words, ‘The guns are down,’” he said. “I finally got agitated and said, ‘I shouldn’t have called’ and hung up.” Then, Sgt. Corrigan took one of his prescribed sleeping pills and went to bed.

Around 4 am, the Metropolitan Police Department and its SWAT unit showed up at the Sgt.’s home.  They lit up his house with Flood Lights, and instructed him to come out of his home.

Sgt. Corrigan complied, but as he walked out of his home he realized these heavily armed officers weren’t messing around.

After dropping to his knees and crossing his ankles, to show the MPD that he did not pose a threat, the officers swarmed in on him.

“They immediately zip-tied me tighter than I would have been allowed to zip-tie an Iraqi,” Sgt. Corrigan told Ms. Miller.  “We had to check to fit two fingers between the tie and the Iraqi’s wrist so we weren’t cutting off circulation. They tied mine so tight that they hurt.”

Following his apprehension, officers raided his locked house against his will and seized his firearms.  Later he would be charged with three counts of unregistered firearms (in D.C., like in NYC, Chicago, and Hawaii, one has to register each individual gun) and seven counts of possessing ammunition in different calibers.

Fast forward to this past Monday, Sgt. Corrigan appeared before Judge Michael Ryan at D.C. Superior Court.  While in front of the judge, the District’s assistant attorney general moved to dismiss all charges against him.

But unfortunately, the emotional damage is done. “For court, I put on a face showing I’m okay,” he told Ms. Miller. “Overall, this has broken me.”

Ms. Miller plans on doing another installment, going into greater detail about the plight of Sgt. Corrigan and his experiences with MPD.  We’ll keep you posted.  Also, please make sure you check out her article in the Washington Times.