The federal government is ending a proposed ban on shooting in the Sonoran Desert National Monument, a 487,000-acre monument in Arizona.

Gun owners and environmentalists are squaring off over this issue, and the federal government is caught in between. In a nutshell, gun owners want to continue recreational target shooting in the monument, but environmentalists fear that the impacts are damaging local plants and wildlife, so they want to get rid of the shooting ranges. 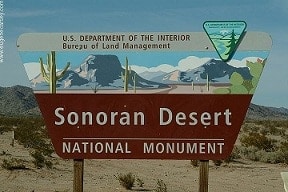 Well, the bullets are indeed damaging local plants and the affecting the ecosystem, but the problem is that environmentalists have not fully proven that it is the target shooters — and not illegal shooters — who are doing the damage.

The Bureau of Land Management (BLM), which manages the monument, issued a written statement explaining that they would continue to allow “responsible sportsmen to continue enjoying this recreational opportunity in an appropriate manner.”

Opponents of the plan think that this move is hypocritical and motivated by political reasons. A recent report by the BLM found that a mere 20 percent of the monument’s acreage are suitable for public shooting. Phil Hanceford, an attorney for The Wilderness Society claims, “BLM is making a political decision to blindly ignore its own analysis which shows direct damage to the monument resources from this use.”

By contrast, NRA lobbyist Todd Rathner is overjoyed by the news: “Anywhere there is a perceived conflict between recreational shooting and other uses of public land, we should work out some way to accommodate all uses of public land.”