LaRue Tactical is working on a modified PredatOBR close-quarters 7.62x51mm NATO takedown rifle. The System Utilizing Innovative Technology for Concealed-Access Sniper Environements Rifle, shortened, the “SUITCASE Rifle” this rifle is designed to be quickly assembled and disassembled without accelerated wear on the parts and with the lest amount of shift in point of impact as possible.

In a flash, the SUITCASE Rifle can be assembled from base parts and is ready to fire. LaRue Tactical guarantees that this rifle will not shift the point of impact more than 1/4 of a minute of angle (MOA) from its original zero. You can see the effects in this two minute video where a SUITCASE Rifle is assembled and shot, hitting five out of five eggs (offscreen, unfortunately) at 100 yards. Accuracy is stated as 1/2 MOA, which is very nice for a combat rifle.

The SUITCASE Rifle starts with a very compact AR-10 type rifle, with a 14.5-inch barrel, the same length as the M4 carbine. The rifle is not an National Firearms Act-regulated (NFA) rifle in its standard configuration, equipped with a pinned and welded Surefire 7.62 MB762-211C muzzle break/quick-detach suppressor adapter. This brings the barrel length over 16 inches, required by law. However users may select other muzzle device configurations if they do want the SUITCASE Rifle in an NFA configuration.

With the longest component measuring 16.75 inches long, the SUITCASE Rifle, disassembled, can pack away into the least conspicuous of low-profile bags, and is designed for sniper teams that have to move through public areas without drawing unwanted attention, but we also expect this to be popular with people who like to pack small. 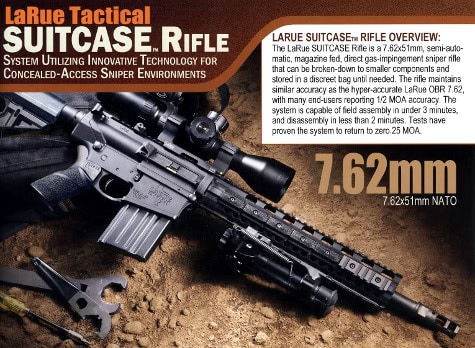 The specifications are as follows:

And the SUITCASE Rifle comes with these accessories:

We haven’t confirmed the price but a PredatOBR of a similar configuration runs $3,000. These guns are not for armchair operators. That doesn’t mean we won’t happily accept a crate of them. LaRue, you ship these by the crateload, is that right?

The only thing we would change is the handrail mounting system. LaRue has stated that they have plans on manufacturing a quick-release handguard, and after that, we’ll have no complaints.