The Armament Research, Development, and Engineering Center at Picatinny Arsenal has been working on its Lightweight Small Arms Technologies (LSAT) program to provide soldiers with lighter equipment that is just as functional and reliable as conventional gear. They wanted to hand over a few prototypes to soldiers to see what they thought of the LMG, and to collect data about modifications they may need to make.

As it turns out, soldiers like the LMG. Well, no, they freaking adore the LMG. The soldiers fired more than 25,000 rounds from the LMG alone, and most of the soldiers preferred the LMG to the M249 SAW, which is currently being used in Afghanistan. 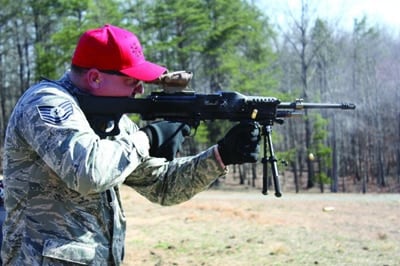 What makes the LMG so loved is that it weighs in at a mere 21.5 pounds, just a little more than half the weight of the SAW.

This light weight enabled soldier carrying the gun to complete obstacle courses at an average time of 1:06 minutes faster than those carrying the SAW. Additionally, soldiers were able to zero their LMG in a shorter time than it took them to zero their SAWs (zeroing is the process of tweaking an individual weapon to make it more accurate).

Some of these soldiers seemed as excited as a kid on Christmas morning. Lt. Col. Jack Emerson, a chief scientist for the Army, reported, “The recoil [on the LMG] is non-existent. I can feel the difference and I’m no weapons expert.”

Another soldier repeatedly failed shooting tests with the SAW, but immediately passed the test the first time when he tried firing the LMG. Fifteen of the nineteen soldiers stated that they would rather take the LMG to war over the M249.