If you’ve heard the name Chris Kyle in recent months, chances are you’ve associated it with one (or more) of the following: (a) with 160 confirmed kills, Chris Kyle is the most lethal sniper in U.S. military history, (b) Chris Kyle is the Navy SEAL, from SEAL Team 3, who just wrote the book about his experiences as a sniper during four tours of duty in Iraq, and/or (c) Chris Kyle is the guy who may or may not have punched Jesse Ventura in the face at a SEAL bar in southern California.

But if that’s all you know about him, then, you don’t know enough.  He is much more than those aforementioned taglines pulled from his bio. See, Mr. Kyle is an avid hunter, a shrewd businessman, a dedicated friend, a devoted father and loving husband  — and yes, just to confirm the obvious, he is a genuine American badass. 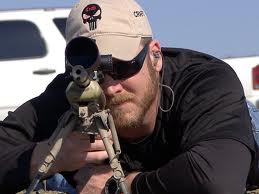 I had a chance to ask Mr. Kyle some questions about guns, his military career and his new role as an executive at Craft International, a security, defense and combat weapons training company located in his home state of Texas.

See, after reading his book and watching and/or listening to many of his interviews, while he was on his book tour promoting, American Sniper American Sniper: The Autobiography of the Most Lethal Sniper in U.S. Military History, I wanted to ask him questions that he had not heard before, or questions that he may have been asked but did not have a chance to fully discuss throughout his travels.  And, of course, I wanted to ask him about his favorite guns.

I opened the email interview with the following question:

S.H. Blannelberry: I have a quick bone to pick, (a) you use “Yankee” in a semi-pejorative way in the book, and (b) at some point you say all people in CA are crazy.

Being born in New York (Buffalo) and now living in California (Los Angeles), I was doubly insulted.  Care to comment on this?

(I added this disclaimer: Obviously, I’m joking.  While I think you understand this, I felt that for precautionary measures it might be best to make that clear.  You’re the last person I want to piss off.  Also, speaking empirically, I agree, people in CA are crazy).

Chris Kyle: I know there have been several people point out that not all Yankees are bad. In fact Jim Defelice is from NYC, and we ended up becoming very good friends.

SHB: In your book, you talk at length about guns and gear, but perhaps you can comment briefly on your favorites, such as your concealed carry weapon?

CK: My weapon is a redone Springfield Micro Compact .45 in 1911. It fits nice in my inside the waist band holster, and has plenty of knock down power. 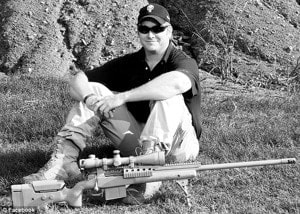 SHB: When is the last time you went hunting?  (Where, what did you shoot, etc?)

CK: I did get to go deer hunting once this year, but because of the book tour, I missed the rest of the season. I went down in Central Texas. Didn’t get a shot because I was letting my son get one first. Next year I am taking plenty of time off for bow hunting, and rifle season. Don’t take my hunting away from me.

SHB: Do you ever contemplate re-enlisting?

CK: I have thought very hard about it, but due to the publicity I would be more of a distraction and liability for the guys. Also, I would lose my family. 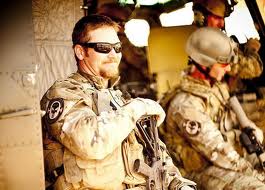 SHB: In the media, there’s little publicity about the quality of care and support veterans are receiving once they return home from duty; from your standpoint, are veterans getting the treatment they need?

CK: Vets do not get the care they need. I am currently fighting the VA. They always try to downplay everything so they don’t have to pay a dime. One of my buddies was blown up, broke his back, and burned, but the VA is saying he is not entitled to any disability. I am drawing attention to this, and trying to make sure vets are receiving the care they deserve.

SHB: What is Craft International?

CK: We are mainly training the military and law enforcement in all different tactical skills. We also provide security for corporations and private individuals. We are a DOD contractor that conducts business with the State Department in many areas around the world. I mainly run the training. That is my way of feeling as if I can still give back.

SHB: Do you enjoy running your own company?  How does it compare to military life?  What are the drawbacks?

CK: I do like this company. There is a lot more stress in the public side than in the military. Here I have to be more careful how I reprimand an individual. Civilians are pussies. The good thing is that we are heavily involved in the security of this nation, and can do things the military wouldn’t be able to get around all the red tape. 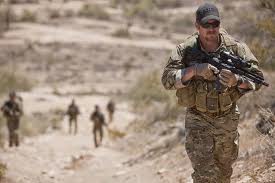 SHB: On the website, there are different defensive firearm courses offered to civilians, what can one expect to learn in taking these courses?

CK: We concentrate on teaching the proper use and safety of the different weapons. We want people to become comfortable with firearms, and be able to properly defend themselves. I love going out on the range the first day of a precision rifle course, and tell the class “see that target at 1000yds, you’ll be hitting it this afternoon”. They all roll their eyes and make comments like, what are you smoking. Then at the end of the course they are amazed how good they have gotten. Every course I have taught, everyone has come out of it capable of shooting a turkey at 600 yards.

SHB: What else is craft up to these days?

CK: Craft is also heavily engaged with the state of Texas doing intelligence to help protect our civilians. Besides all the work, we also take lots of the wounded vets on hunting and fishing retreats. That’s our biggest deal. My view is, it is now our duty to serve those that serve us. We want to promote awareness for the vets, and help them out. They are the true heroes of our nation. They have written a blank check up to the value of their life to protect us. This is my main goal in life now.

Speaking to that notion of serving those that serve us, Mr. Kyle wanted everyone to know that his share of the proceeds from the book are going to the families of his two SEAL brothers who died as a result of the war, Marc Lee and Ryan Job.  Any remaining funds will go to other veteran charities.

If you haven’t purchased the book, you should do so now.  You can buy the book on Amazon.com.  It’s a great read and the money goes toward an even greater cause.

I’d really like to thank Chris Kyle for agreeing to do this interview.  While he shuns this type of praise, he is undoubtedly an American hero.  Not only for his accomplishments in Iraq, which will live on in the annals of military history, but for his humanity and his commitment to our veterans.  He represents the best this country has to offer.  We are forever indebted to him as well as all the brave men and women who served this country.  While we can never pay them back in full, we can start by following in Chris’s footsteps; that is, we can start by serving those who served us.