Today folks across the United States will gather with friends and family to honor those who made the ultimate sacrifice defending the people and land that make this country great, and the ideas and freedoms that make this country strong. Although it is impossible to fully thank those who died protecting this country, we can extend our gratitude by remembering and honoring them along with the men and woman who have also worn the uniform — from Lexington to Gettysburg to Normandy to Iraq and Afghanistan — we say thanks.

Every year in an effort to spread the true meaning of Memorial Day, information tends to get skewed — copied and pasted, re-written, etc — for whatever reason. Often times Guns.com gets messages that contain “fun facts” about the guards at the Tomb of the Unknowns, but once we started digging, realized that they were real wealth of misinformation.

This just didn’t seem right to us (not on this day) so, without further ado, here’s a Twenty-one Guns.com Salute in honor of our veterans as we countdown twenty-one things you should really know about those Sentinels tasked with guarding the memory of perhaps the most venerable casualties of war.

Q: How many steps does the guard take during his walk across the Tomb of the Unknowns and why?

A: Twenty-one steps of course and it alludes to the twenty-one gun salute—the highest honor given to any military or foreign dignitary.

Q: How long does a Guard hesitate after his about face to begin his return walk and why?

A: Twenty-one, again. You can sort of figure out why this time.

Q: Is it true the patrolling soldier wets his gloves before commencing patrol duty?

A: Absolutely. Moistened gloves are an import from military practices past. They also help to prevent the soldier from losing his grip on the rifle.

Q: Does the soldier on duty carry his rifle on the same shoulder all the time and, if not, why not?

A: The guard always carries the rifle on the shoulder away from the tomb out of respect. After twenty-one paces, he executes an about face and moves the rifle to the outside shoulder.

Q: How often are the guards changed?

A: Every 30 minutes from April to September, every hour from October to the end of March. When the cemetery is closed, guards change every two hours.

Q: How often is there a guard posted at the tomb?

Q: For how long has this been going on?

Q: So that’s when they first erected the Tomb of the Unknowns?

A: Nope. That happened on March 4, 1921, and it was patterned after England and France who founded similar monuments a few months earlier.

Q: Why do they have to guard it?

A: Back in the early 1920’s, there weren’t any guards and the Tomb looked much different. Believe it or not, the tomb was a popular picnic area (probably because of the view), and with families frequenting the monument, it began to show significant wear and tear. By 1925 a civilian guard was hired to keep folks from adding their signature to the monument, in 1926, a military guard was posted during cemetery hours and by 1937, this was expanded to the present 24-hour watch.

The ceremony developed out of this tradition and throughout the years morphed into the grand pageant to that we have today. Overly eager tourists are the folks most Honor Guards have to deal with now and this has lead to more confrontations than you’d expect (often frightening ones when it is between an Honor Guard and an unruly child!)

Q: I heard there are actual physical traits a guard must posses to guard the tomb of the unknown soldiers. This is a rumor, right?

A: No it is not. For a person to apply for guard duty at the tomb, he must be between 5′ 10′ and 6′ 2′ tall and his waist size cannot exceed 30 inches round. Of those that apply only about 20 percent are accepted to train.

A: There have been three female Honor Guards at the Tomb of the Unknowns since 1937.

Q: Let’s get down to the street buzz. I’ve heard Sentinels have commit two years of life to guard the tomb. Is this true?

A: No. There is no set time for service. The average tour is one year.

Q: Do the guards live in a super secret barracks under the tomb?

A: No. They either reside at Fort Myer, which is adjacent to Arlington National Cemetery or they live in off base in an apartment just like anybody else. There is a thread of truth to this though—there is a living quarters under the steps of the nearby amphitheater, but this is only where guards hang out during their 24-hour shifts. When an Honor Guard is off, his time is his (or hers as the case may be).

Q: Honor Guards are not allowed to drink alcohol on or off duty for the rest of their lives, right?

A: What!?! No, this is not true. If a Guard is of legal age he may drink alcohol—off duty.

Q: Guards may not swear in public for the rest of their lives.

A: See Number One in the Constitution. This is a rumor. 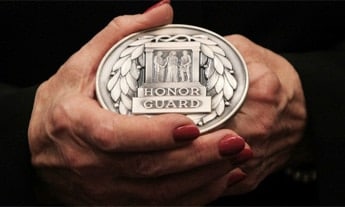 Q: After two years, the guard is given a wreath pin that is worn on their lapel signifying they served as guard of the tomb. There are only 400 presently worn. The guard must obey all the rules above and many more not listed for the rest of their lives or give up the wreath pin. Is this at least true?

A: Not really. The Tomb Guard Identification Badge has been around since the 1950s and is awarded after the Guard passes a series of tests and is permanently awarded after a Sentinel has served 9 months as a Sentinel at the Tomb.

More than 500 have been awarded and while the badge can be revoked like any military honor, the offense must be so egregious it that it disgraces the Tomb. Revocation is at the Regimental Commander’s discretion, but you can drink a beer and drop a couple of harsh Fs and still keep the badge.

Also, there is no pin. The Badge is a full size award, worn on the right pocket of the uniform jacket, not a lapel pin.

Q: Are the Guards shoes made with special thick soles to keep the heat and cold off their feet during nasty weather?

A: They are standard military dress shoes—but that doesn’t mean they are not special. 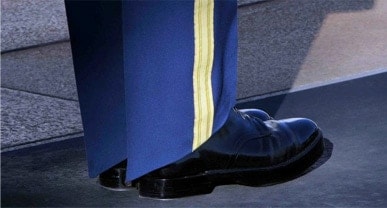 First off, the sole and heel are equal in height so Sentinels can stand very straight and “roll” on this heel build up during each jaunt down the mat, allowing for a very fluid motion (sort of like a Groucho Marx duck walk). You can tell if a Sentinel is practicing this walk correctly if his hat and bayonet do not “bob” up and down with each step.

The thinking is that it presents a more formal walk and something as far away from a “march” as possible.

The soles have a steel tip on the toe, a “horseshoe” steel plate on the heel and what is called a “clicker”—a shank of steel attached to the inside of the face of the heel build-up on each shoe, which is incredibly important to the changing of the guards.

If two guards are really good at their job, they can time their heel clicks to sound like one click. Honor Guards call this a “smoker.” At times, the guard change even done in “silence” out of respect to the tomb and without the use of voice commands, everything is done in relation to the heel clicks.

Q: How do those sneaky Sentinels get to their shifts without being seen?

A: Most if not all wear civilian clothes and simply blend in with the crowd.

Q: What happens when there is bad weather?

A: From The Society of the Honor Guard website, “The guards at the Tomb of the Unknown Soldier (we call ourselves “Sentinels”) are completely dedicated to their duty of guarding the Tomb. Because of that dedication, the weather does not bother them. In fact, they consider it an honor to stand their watch (we call it “walking the mat”), regardless of the weather. It gets cold, it gets hot – but the Sentinels never budge. And they never allow any feeling of cold or heat to be seen by anyone.”

That said, the soldiers welfare is of the utmost importance and there is a chain of command in place that will determine whether or not to remove a guard for safety reasons. There was an erroneous story about Sentinels refusing orders to stand down during Hurricane Isabel in 2003. These stories are not true.

Q: How long does it take a Sentinel to prepare his uniform for a shift?

A: It takes the average Sentinel 8 hours to prep his/her uniform for the next work day. Additionally, they have Physical Training, Tomb Guard training, and haircuts to complete before the next workday so their free time is limited, perhaps giving start to the two year tour rumor.

Q: And last but certainly not least, what guns do the Sentinels patrol with?

A: The rifle Honor Guards shoulder has changed many times throughout the decades and at times was shelved in favor of pistols. Over the years, Sentinels have patrolled with M1903 Springfield rifles, M1 Garands, M1911 .45 ACP and M9 9mm Beretta pistols. Today they use M14s with a bayonet. The ceremonial gun is always kept unloaded as a tribute to the unknowns.

Image credit: Society of the Honor Guard: Tomb of the Unknown Soldier