‘May-Issue’ in Massachusetts Still Cause for Concern

As Guns.com reported back in April, concealed carry permits are on the rise in Massachusetts.  Yet overshadowing this encouraging news is the lack of uniformity when it comes to the Bay State’s CCW issuance standards.

Since Massachusetts is a ‘may-issue’ state, obtaining a firearm is not a matter of simply satisfying some objective requirements laid out in the law.  Rather, approval for concealed carry is ultimately at the discretion of local police departments.

A recent article in the Patriot Ledger highlighted this dilemma, pointing out how the state’s different police departments have created a “patchwork” of rules that differ from town to town. 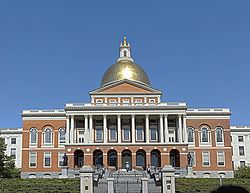 “In Hanover, gun owners should plan on taking a gun safety test every six years, even if they’ve already taken it. In Pembroke, applicants must write a letter to the chief explaining why they want a license. And in Canton, the chief rarely hands out an unrestricted license to carry a concealed handgun unless the applicant has already been licensed for several years.”

In short, it’s a mess.  And law-abiding gun owners are growing weary of it.

“Because of the absurd way in which the Legislature delegated licensing authority, you have 352 different authorities with 352 different standards, which would seem to be a textbook example of ‘arbitrary and capricious,’” Keith Langer, a Wrentham lawyer who has represented gun owners in Massachusetts, told the Patriot Ledger.

To make matters even more confusing, not only are there different standards on a department by department basis, there’s also several different types of permits available to the public: Class A, Class B, firearms ID card and a card that one must acquire to carry mace or pepper spray.

To apply for a Class A permit, one must pay a non-refundable $100 fee, fill out a 4-page application, and complete a 4-hour, state-certified safety course.  After the individual completes the course, he/she brings the certificate to the local police department, which – as mentioned – makes the final call.

As the Patriot Ledger noted, some police chiefs even require that applicants provide a doctor’s letter, a letter or letters of reference (from a gun club) or a personal letter to the chief detailing why the applicant needs a Class A or a Class B license.

“In our experience, it is simply trying to make it more difficult for the lawful citizens to exercise their civil rights,” Jon Green, director of education and training for Northboro-based Gun Owners Action League, told the Patriot Ledger. 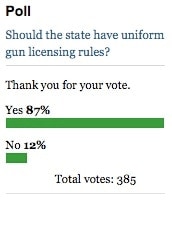 But gun control advocates like John Rosenthal, the founder of Newton-based Stop Handgun Violence, told the Patriot ledger that Massachusetts ‘may-issue’ method is one of the reasons why the state has one of the lowest rates of gun deaths in the country.

“In reality, your local chief knows you and can easily access records that may not be accessible to others, including how many calls have gone to your house; if there’s a history of domestic abuse or mental problems,” he said. “You can’t be too safe with a gun.”

While the ‘may-issue’ mess is tough to ignore, one can take momentary solace in the fact that according to state records, Massachusetts issued more than 21,100 new Class A licenses in 2010 and upward of 22,300 in 2011.

So, it appears that an increasing number of Bay Staters are having luck fighting through the bureaucratic rigmarole and attaining a license that allows them to exercise their 2nd Amendment rights.  Let’s hope this trend continues and eventually leads lawmakers to institute ‘shall-issue’ or ‘Constitutional carry’ standards.