San Francisco city officials want to beatify areas around Lake Merced, the problem is they want the Pacific Rod and Gun Club to pay for it, or at least part of it.

The question is, how much of the $10 million the city estimates it will cost to rid the area of soil contaminates should the Pacific Rod and Gun Club be on the hook for?

For starters, the Club has been around for quite some time.  In 2008, it celebrated its 80th Anniversary.  So, there is little doubt that it has contributed to the elevated lead, arsenic and other contaminants found on the 14-acre site, adjacent to the Club, which the city plans to refurbish. 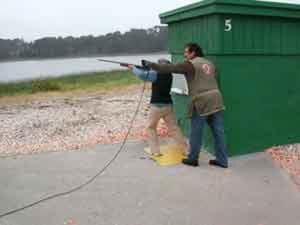 “…You don’t have to be a marksman to clearly see how the site contamination is a result of their decades long use of lead shot,” San Francisco Public Utilities Commission spokesman Tyrone told the SF Examiner.

However, the Club stopped using lead bullets and toxic clay pigeons in 1994 when the law was changed.  Moreover, the long-term lease the Club signed with the city did not contain any provisions about cleaning up the land.

These are facts that SFPUC chair Ed Harrington openly acknowledged.  He told KCBS that although he wants the Club to chip in, the burden ultimately falls to the city.

“When you own a lot of land, and you had it used for things that back in 1930 somebody thought was OK, it doesn’t always mean that it is today,” he told KCBS.

Harrington added that a long-term approach is needed to solve the problem since neither the city nor the Club has $10 million lying around to spend on soil removal.

“We will have to work out with the gun club what they are willing to do, or are able to do,” he said, also cautioning that if the club did not play ball then it “was very possible the club would have to move if it cannot come to terms with the city.”

The club contends that the cleanup should only cost half of what the city projects, around $5 million.

So, at least at this point, it sounds like the two parties need to agree on what actually needs to be done and the costs associated with those cleanup activities.  Once those key questions are answered, then they can determine how to split the bill.

Meanwhile city planners are anxious to get started with the renovations.  Rec and Park General Manager Phil Ginsburg told the SF Examiner that there is “really good news” on the horizon for Lake Merced, including $2 million that’s part of a proposed November parks bond for capital improvements.

“We are all impatient to fulfill the incredible potential for waterfront recreation on the lake,” he told the SF Examiner.  “For instance, the renovated clubhouse will offer an exercise room and program space, and sell fishing tackle,” Ginsburg said. Additionally, the department plans summer and fall programs at the lake.

Hopefully, the Pacific Rod and Gun Club can reach an agreement with city officials.  It would be a shame if it had to relocate.