The UTS-15 may be the next big movie gun. The manufacturer, UTAS Makina, has just signed a contract with the producers of the film “The Matarese Circle,” an adaptation of the spy thriller by the same name written by Robert Ludlum, famous for his books which served as the basis for the Jason Bourne films.

“The Matarese Circle” will star none other than Tom Cruise and Denzel Washington as rival spies pitted against each other who, in their conflict, uncover the Matarese, a multinational cabal that secretly pulls the strings in the highest offices around the world. 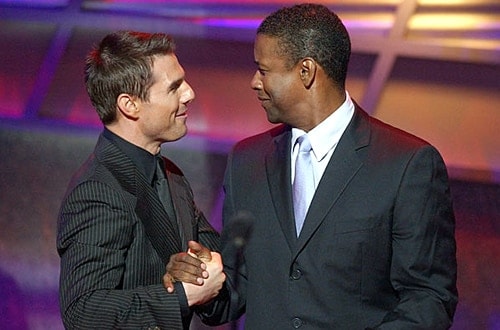 And they’re going to point really tremendous shotguns at each other while they do that. In truth, we don’t know what the details are aside from there being a contract between UTAS Makina and the studio making this film, but we hope that these sexy guns get the limelight. The UTS-15 has already been televised in the science fiction TV series “Fringe.”

It’s not too hard to figure out why. The UTS-15 is slick pump-action bullpup shotgun, a modernized version of the South African Neostead shotgun, and it has two independent magazines for a total capacity of 7+7+1 (with 2-3/4-inch shells; 6+6+1 with 3-inch magnums). The shotgun can be configure to fire from one magazine or the other, or alternate between the two automatically.

The magazines can also be topped off independently, as there are two loading ports, one on either side of the shotgun, and each magazine has a peep slit so you can visually confirm what you’ve got in the tubes. The UTS-15 was designed with ergonomics and ease of use in mind, as evidenced by the AR-15-style grip and safety. It’s also fairly versatile with its full-length topstrap Picatinny rail for any optics, and it has a compartment under the barrel for a flashlight or laser sight.

Overall the UTS-15 measures just 29 inches long, thanks to the bullpup design, where the action is built into the stock. It does have an 18.5-inch barrel, and through the use of a good amount of polymer, weighs less than 7 pounds unloaded.

The UTS-15 is being made here in the US, in Des Plaines, IL. Although it’s a Turkish update to a South African design, to be absolutely positive that the BATFE can’t prohibit their import, UTAS Makina is manufacturing them in the Heartland. UTAS has a long history of working with American companies and has manufactured firearms or parts for Kimber, Savage and Smith & Wesson.

UTAS is also working on big-bore versions for police and military use as a grenade-launching platform, and a semi-automatic version is already in the pipe. Expect to drop a little over a grand to pick one up once they do become available, which is expected to be later this year.