Working with Team Russian Technologies, the Russian national practical shooting team, Izhmash has developed an update for their phenomenally popular semi-automatic shotgun, the Saiga 12. This modified shotgun, produced by the efforts of team captain Ilyin Vsevolod Kirisenko and Izhmash engineer Alexey Shumilov, has many updates to Saiga platform we’re familiar with most.

First and foremost it is not a “sporterized” shotgun. It is in full pistol-grip regalia, with a SAW-type grip, telescoping buttstock, and improved forearm. The buttstock follows the AR pattern and runs parallel to the shotgun bore and looks to be compatible with aftermarket AR-15 buttstocks. It doesn’t look like a side-folder.

The handguard is changed with the addition of a top section that covers the gas tube for the forward grip that’s becoming much more common, especially in the competition world. Iron sights are gone, replaced with a Beryl-style dust cover with a Picatinny rail that’s hinged to the barrel trunnion. This shotgun is designed to be run with a red dot sight.

The magwell is also dramatically altered. Also taking a cue from the AR and other combat rifles, it uses a push-button release and free-falling magazines. The magwell is also flared for fast reloads. A couple of other competition-friendly alterations include a gigantic muzzle device that looks like a combination compensator and brake, as well as a hydraulic or spring-loaded stock tube.

Saiga claims this shotgun is also modified for enhanced reliability, with early prototypes running 1,500 rounds without stoppages. This model appears to have an updated adjustable gas piston which would easily account for much of that improved performance. Adjustable gas pistons go a long way to ensuring that both heavy and light loads cycle equally reliably. 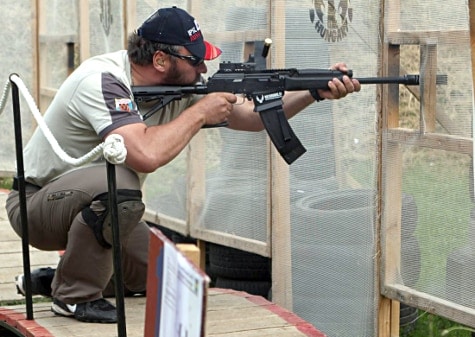 If Saiga, Izhmash, can bring these to the US market they’ll dominate auto shotgun sales for some time, that’s for sure. We really hope that, as soon as the modifications prove worthwhile, that future sporterized models inherit at least a few of the changes these example competition models have, specifically the adjustable gas system, forearm, and topcover rail.

Historically the ATF has blocked the importation of sweet and glorious machines such as these, claiming that they have no sporting purposes (a particular irony as that is given this shotgun was developed specifically for competition shooting), however a recent act of Congress, H.R. 5326—the appropriations bill for the Departments of Commerce and Justice, Science, and Related Agencies fiscal year 2013—passed on May 10th, 2012, prohibiting:

“…The Department of Justice from requiring imported shotguns to meet a “sporting purposes” test that the Bureau of Alcohol, Tobacco, Firearms and Explosives has used to prohibit the importation of shotguns with one or more features disliked by the Agency, such as adjustable stocks, extended magazine tubes, etc.”

We have high hopes that in the future, we’ll put some lead downrange with this shotgun. Team Russian Technologies recently took first and second place at the international Yarlslovl Golden Cup Ring competition, and second a the Third Central European Championship, to a Czech shooter—competing with a modified Saiga 12.